No compromise on Syria as Turkey calls US, Russia for Assad's ouster 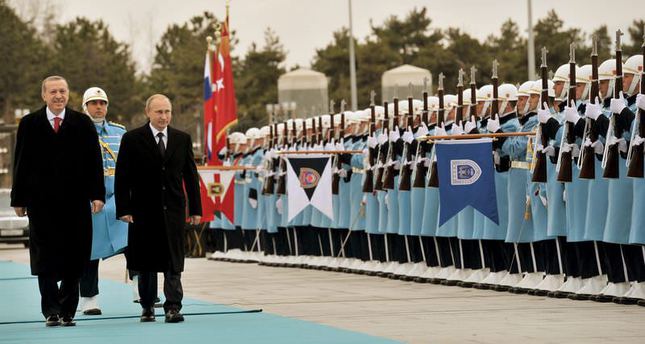 by Daily Sabah Dec 02, 2014 12:00 am
President Recep Tayyip Erdoğan and his Russian counterpart Vladimir Putin on Monday agreed to work together against the Islamic State of Iraq and al-Sham (ISIS) in Syria despite their vastly different views on the ongoing violence in Syria, which has killed tens of thousands of people and paved the way for terrorist organizations in the region.

As part of Putin's visit to Ankara, he and Erdoğan held a joint press conference and gave messages on the Syrian civil war, ISIS, the trade volume between the countries and the energy issue.

Ankara and Moscow follow completely different foreign policies on the Syrian civil war as Russia remains one of Syrian President Bashar Assad's few allies, routinely blocking resolutions against his regime in the U.N. Security Council. Turkey, on the other hand, is one of the fiercest critics of Assad considering the humanitarian violence in the region and Assad's policies that created a suitable atmosphere for the rise of terrorist organizations.

"We have a common stance [with Russia] over the [ISIS] terrorist organization there," Erdoğan said.

Erdoğan added that there is a need of a common position and common act in the face of terrorism in Syria.

"There has been no problem on the issue of terrorism. We occasionally see how much Russia has suffered from terrorism and we know that there cannot be an understanding such as 'your terrorists' and 'my terrorists,' " he added.

Putin similarly said: "We do not want chaos in Syria or the strengthening of terror groups."

Erdoğan left no room for the Assad regime to remain in power and said a consensus should be built against ISIS as well.

"We have agreed with Mr. [Putin] that a solution is needed [in Syria], but the problem is how," Erdoğan said and added: "It is impossible to reach a solution with Assad."

"I have clearly expressed that the recent regime in Syria terrorizes, kills and tortures. We differ on how to bring an end to the current situation there," Erdoğan said.

Putin, meanwhile, said that Russia is making efforts to stop the "bloody war and conflicts" in Syria.

"Are we insisting Assad remains in power? I would like to convey that question to the Syrian people. An election was held there and we saw that Assad has major support. However, we do not think that the situation in Syria is normal," Putin said, adding that Russia has limited contact with the Syrian government.

Erdoğan was swift to denounce the notion that Assad had popular legitimacy.

"Coup rulers come to power in the world by taking a high percentage of votes… There is an attempt to legitimize a person who came to power [in Syria] through anti-democratic means," he said.

Pointing out that more than 300,000 people lost their lives in Syria, Erdoğan continued: "The history, a civilization, everything in Syria is destroyed. People have been killed violently. [Turkey] also pays a price for [the humanitarian crisis in Syria]. There are 1.6 million [Syrians] in my country and we have spent nearly $5 billion so far. The entire world supported us with $200 million. So it is important for us to cooperate with Russia."

Erdoğan did not deviate from Turkey's stance on Syria and said that what is needed in Syria is an inclusive government in which different segments of society have political representation.

Even though Putin and Erdoğan differ on Syria, they are cooperating on economy and energy issues, which are the main agenda of Putin's visit.
Putin said that Russia will reduce the price of natural gas sales to Turkey 6 percent to Turkey as of Jan. 1, 2015.

"We will meet Turkey's growing energy demand by building a new energy terminal and increasing the capacity of the Blue Stream," he said.

He added that Moscow will halt the construction of the South Stream Natural Gas Pipeline project and will build a natural gas hub on the Greek border with Turkey. On Monday, Russia and Turkey signed a memorandum of understanding to build the hub.

Putin also said that whoever needs Russian gas will buy it through Turkey. The discount on Russian gas to Turkey will increase as cooperation between two countries develops further, he said.

On economic ties, Erdoğan said that the two countries aim to raise the current $33 billion trade volume to $100 billion by 2023.

Erdoğan also touched on the trade deficit between Russia and Turkey. "Some $25 billion of current trade is composed of Russian exports to Turkey while Turkish exports to Russia are some $7 billion. To reduce this gap, we have decided to increase our relations in many fields including energy, tourism, construction and investment," Erdoğan said.