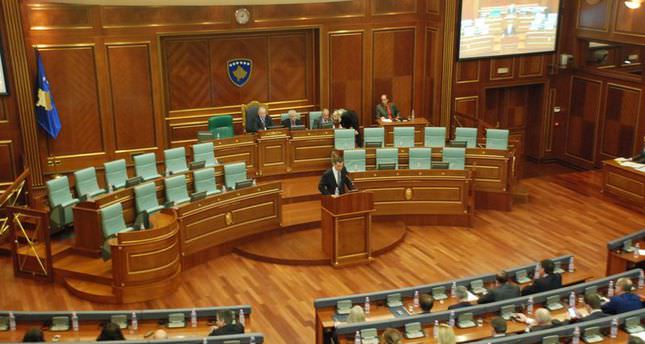 by AA Dec 10, 2014 12:00 am
Turkey has welcomed Kosovo's newly formed government, a step that came after the country's two largest parties agreed to form a coalition, a statement by Turkey's foreign ministry said.

Isa Mustafa, the leader of the Democratic League of Kosovo party, was sworn in as Kosovo's new PM Tuesday.

Meanwhile, Hashim Thaci, Kosovo's PM since 2008 and the leader of the Democratic Party of Kosovo, will serve as deputy PM and foreign minister.

The Turkish foreign ministry said it hopes the new government will launch projects that will bring about prosperity for the Kosovan people.

"We also wish for the government to integrate with the country's European institutions," the statement added. "Turkey believes Kosovo's multi-ethnic, multi-cultural and democratic structure is vital to maintain regional peace and stability."

The foreign ministry also welcomed the participation of representatives from Turkish descent in Kosovo's new government.

Mahir Yağcılar, a politician of Turkish descent from the Turkish Democratic Party of Kosovo, will serve as the minister of public administration in the new cabinet.

The positions are among a range of appointments that received a vote of confidence from the Assembly of Kosovo. A total of 73 deputies voted in favor of the new cabinet, 38 were against and 20 abstained.

Kosovo declared its independence from Serbia in 2008 and has since been recognized by 108 states, including the U.S., the U.K., Germany, France and Turkey.

Serbia, China and Russia are some of the main countries that do not recognize Kosovo's independence.