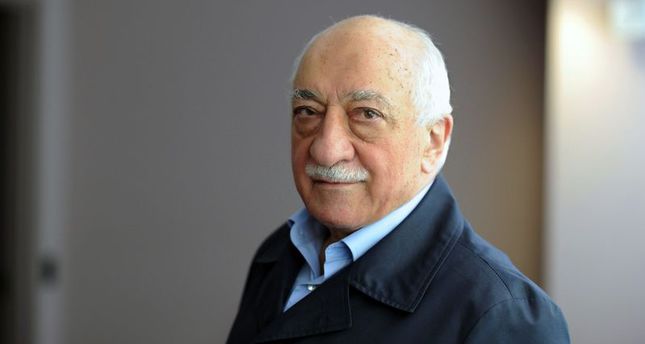 by Nurbanu Kızıl Dec 29, 2014 12:00 am
The first official step to issue a Red Notice for Fethullah Gülen, the leader of the Gülen Movement, was taken on Monday according to reports. A Turkish court submitted a written request to the police to locate Fethullah Gülen under the scope of the December 14 Tahşiye Operation.

According to Turkish media outlets, the police have informed the court that Gülen is currently not in Turkey, prompting the court to request Gülen's extradition from the government of the United States based on bilateral agreements.

The court is expected to prepare the Red Notice request and submit it to the Ministry of Justice, which will convey the request to the Ministry of the Interior and Foreign Affairs to officially request Gülen's extradition. The Justice Ministry will also request Gülen's extradition under the scope of the Extradition and Mutual Assistance in Criminal Matters between the United States and the Republic of Turkey Treaty, which was signed in 1979.

It was reported that Gülen's illegal securing of his green passport may be another reason for a new extradition request, as he will be tried under the scope of forgery of documents and misleading officials.

The Gülen Movement is seen as a threat to national security as they are accused of infiltrating top state institutions, including the police and judiciary, and wiretapping thousands of people including senior officials, journalists, actors, NGOs and others.

Fethullah Gülen, who lives in self-imposed exile in the United States, is accused of leading a criminal organization and officials have reported that sufficient solid evidence has been discovered proving his crimes.

Turkey and the U.S. have a different extradition treaty from the one it has with EU countries. The Extradition and Mutual Assistance in Criminal Matters between the United States and the Republic of Turkey treaty from 1979, which came into effect on Jan. 1, 1981, says: "When the offense has been committed outside the territory of the Requesting Party, the Requested Party shall grant extradition subject to the provisions described in this Treaty if either: the laws of the Requested Party provide for the punishment of such an offense committed in similar circumstances, or the offense has been committed by a national of the Requesting Party, and that Party has jurisdiction, according to its laws, to try that person."

Despite the different procedure prescribed in the treaty, Turkey extradited a number of criminals to the U.S. over the last five years while it has not demanded any extraditions from the U.S. until now.

Among the criminals extradited by Turkey, Diane H. Frederick Atari, 43, drew the most attention from an indictment in Loudoun, Virginia for a $50 million mortgage and credit scam. Atari fled to Turkey in 2009 shortly before being indicted. Turkey extradited her on Feb. 18, 2011.

Jordanian Fahed Kutkut, who was sought by police in the U.S. for murder and wide-scale theft was also extradited by Turkey to the U.S. In 2009, Kutkut was arrested in Turkey based on the "red notice" that was issued against him. In 2010, Kutkut was returned to the U.S. Ukranian Yuri Zinchenko, who was sought for human trafficking, money laundering and racketeering, was also extradited from Turkey to the U.S. Iranian Sayed Hadi Mahdavi Mortazavi was also sought for charges of money laundering and fraud through communications technology. Ahmed Diini, a Dutch citizen of Somali origin who was being sought on terrorism charges with a red notice by the U.S. government, was captured in Turkey in March and is currently being held in an Istanbul prison as part of the extradition case waiting period.

Ahmad Ibrahim al-Ahmad, a Syrian who was believed to supply improvised explosive device components to be used against U.S. soldiers and who is held responsible for the murder of four U.S. soldiers, was extradited to the U.S. by Turkey in August 2014.

The extradition request for Brazilian Domingos Neto Trofino, who was sought for tax evasion and fraud, was denied due to a lapse of time.
Speaking on the latest debate of Gülen's extradition, U.S. officials said that the Department of Justice will process the application for his extradition, but have underscored that it might take a long time. The officials, who refrained from making comments on presumptive matters, said general procedures are followed for all extradition requests. "All of the applications go through the same judicial process and the standards are equal for every country," they said.

A Red Notice - which is comparable to an international arrest warrant - is issued by a state to find the location of a suspect sought by a judicial authority or an international tribunal with the request for his or her extradition. It serves as an international alert used by police to convey information about criminals and crimes. If issued, Gülen's identification information, the crime he allegedly committed, photographs, fingerprints and penalty will be distributed to the 190 member countries. The validity of the notice is five years. Since Gülen's address in the U.S. is known, the Turkish state will ask for his extradition.