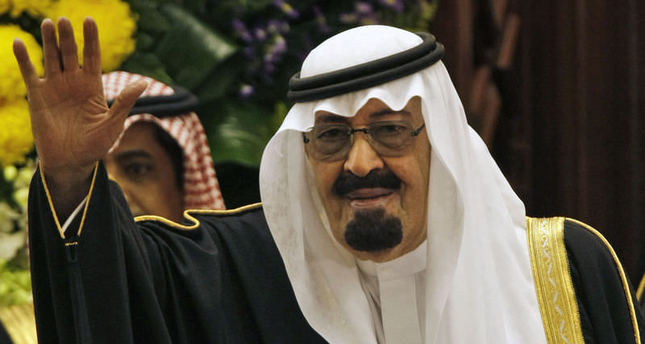 by daily sabah Jan 23, 2015 12:00 am
Turkey has declared a day of mourning on the 24th of January for the late Saudi King Abdullah bin Abdulaziz, who died early Friday at the age of 91.

President Erdoğan also cut his Africa trip short in order to attend the funeral of King Abdullah on Friday afternoon. He is expected to continue his visit to the African states of Djibouti and Somalia over the weekend.

The heads of Arab states declared periods of national mourning for the king's death as well.

Bahrain's King Hamad bin Issa Al Khalifa declared a 40-day official mourning, during which government institutions will be closed for three days and the flag flown at half-mast.

Emirati President Khalifa bin Zayed Al Nahyan has also ordered an official mourning for three days starting Friday, during which the flag will be flown at half-mast inside the United Arab Emirates (UAE) as well as all of its diplomatic missions abroad.
Last Update: Jan 23, 2015 7:29 pm
RELATED TOPICS