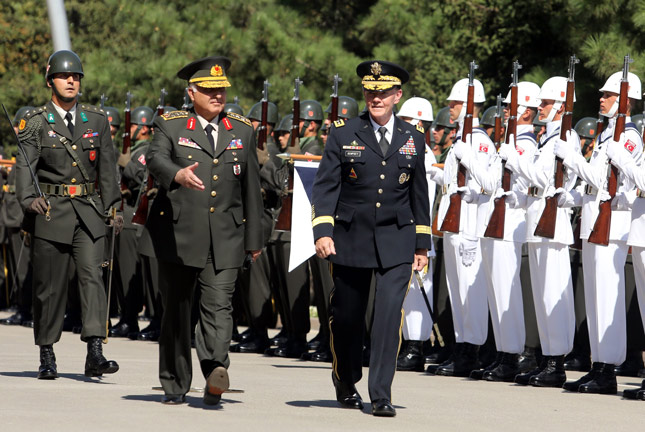 Turkey's Chief of the General Staff Gen. Necdet Özel and the highest-ranking U.S. military officer, Chairman of the Joint Chiefs of Staff Gen. Martin Dempsey, came together at a security meeting held in Riyadh, Saudi Arabia yesterday. The focus was on the Islamic State of Iraq and al-Sham (ISIS) crisis in Syria and Iraq and other regional terrorism-related issues. The military chiefs reportedly also discussed the train and equip program for the moderate Free Syrian Army (FSA) agreed between the two countries.

Defense Minister İsmet Yılmaz is expected to meet U.S. officials at the White House Summit on Violent Extremism in the upcoming days. Foreign Ministry spokesperson Tanju Bilgiç said that once the protocol is signed, practical steps will be taken at a time no further than next month.

Turkey has continuously expressed that a comprehensive strategy including safe and no-fly zones in Syria along with training opposition groups is necessary for a permanent solution in the war in the neighboring country.

As part of its role in the anti-ISIS coalition, Turkey allowed Kurdistan Regional Government (KRG) peshmerga forces to access its territory in order to enter the Syrian town of Kobani, which has recently been cleared of ISIS control. Turkey also deported over 1,000 foreign fighters, many of whom are from the West, either upon requests of their home country or after discovering their connection to the militant group. Furthermore, over 10,000 people are on the no-entry list of the country.

Meanwhile, Interior Minister Efkan Ala and representatives of other executive member states of the Organization of Islamic Cooperation (OIC) came together in Jeddah, Saudi Arabia on Sunday, in which the organization announced a package of urgent measures to prevent the rapid spread of terrorism, which has hit a number of OIC member states, and halt a surge of violence in the Muslim world. The executive committee of the OIC, which is comprised of members from Egypt, Senegal, Turkey, Saudi Arabia, Kuwait and Guinea along with Secretary-General Iyad Madani, called for the development of an appropriate mechanism to face new trends of terrorism in member states. The meeting is in response to a call by Madani to tackle terrorist attacks in the region. The meeting was chaired by Saudi Arabia and a number of mechanisms and strategies to fight terrorism and extremism were discussed. It called for holding conferences, seminars and workshops with the participation of political leaders, clerics, community leaders, scholars and experts to discuss the best possible ways of responding to terrorist threats, electronic security and to work with OIC member states to develop a new approach and treatment of sectarian violence.