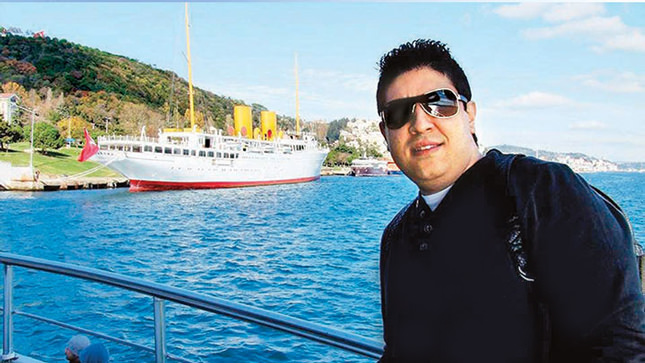 by Ragıp Soylu Feb 25, 2015 12:00 am
Turkey extradited an Iranian hacker to the United States in early February who was accused of committing computer and wire fraud against an aerodynamics company and stealing millions of dollars of software. Turkey's extradition decision came amid increasing diplomatic pressure on the administration of U.S. President Barack Obama regarding the Turkish requests for Fethullah Gülen's extradition or deportation.

Nima Golestaneh, a 29-year-old university student, was delivered to U.S. officials on February 12 in Istanbul. Golestaneh, whom Interpol issued a Red Notice for on the request of the FBI, was taken to Vermont where a district court judge signed an arrest warrant for him.

Turkish police forces arrested the Iranian hacker, who is facing up to 30 years of prison, in Istanbul's main tourist area, Sultanahmet, in December 2013. After keeping him in Turkey for several months, the government suddenly decided to hand the hacker over, a move that might be considered a step to show the Obama administration that the government of Prime Minister Ahmet Davutoğlu takes the bilateral extradition treaties seriously and a hope that the move will be reciprocated.

According to legal documents, Golestaneh is accused of remotely accessing the computers of an American company in Vermont without the company's authorization in order to steal a complete copy of the company's proprietary software between April 2012 and May 2013. The software stolen from the company is used in aerodynamics analysis and design and normally sells for $40,000 to $800,000 per unit. Golestaneh appeared in court following his arrival in Vermont on February 13.

Iranian hackers were believed to be behind many of the major infiltrations of aerospace firms, airports and airlines around the globe over the past two years, according to U.S. cyber security firm Cylance. It is still not clear whether Golestaneh's case is one of them.

Turkey has extradited a number of criminals to the U.S. over the last five years but has not demanded any extraditions from the U.S. until now.
Ahmad Ibrahim al-Ahmad, a Syrian who was believed to be supplying improvised explosive device (IED) components to be used against U.S. soldiers and who is held responsible for the murder of four U.S. soldiers, was extradited to the U.S. by Turkey in August 2014. Sought with an Interpol Red Notice, Ahmad was arrested in Turkey on May 17, 2011 and extradited to the U.S. on August 27, appearing in court a day after his extradition. Ahmad, who is accused of supplying IED components that were used against U.S. soldiers in Iraq from 2005 to July 2010, is reportedly associated with the 1920 Revolution Brigades. A statement issued by the U.S. Department of Justice read that Ahmad supplied IED components to the 1920 Revolution Brigades insurgent group.

An arrest warrant has been issued by an Istanbul court for Fethullah Gülen, the head of the Gülen Movement, which is allegedly responsible for infiltrating the police and judiciary with an aim to topple the government, the first tangible step that may pave the way for his extradition has been taken. Gülen currently resides in the U.S. state of Pennsylvania. A red notice is expected to be issued following completion of legal process in Turkey.