Disarmament call ushers era of peace and reconciliation in Turkey 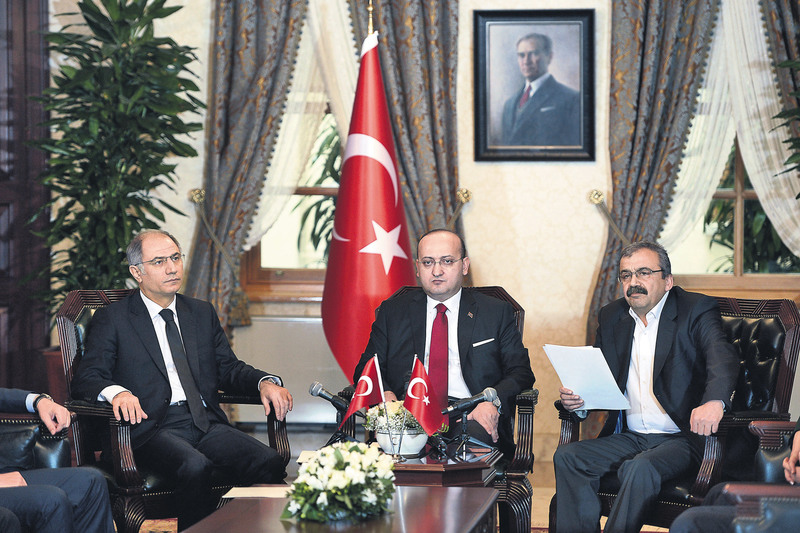 The government's reconciliation process produced its most tangible result over the weekend, with the jailed leader of the PKK, Abdullah Öcalan, calling on the group to lay down its arms and become part of the country's political spectrum

Imprisoned PKK leader Abdullah Öcalan's call to the group to lay down its arms on Saturday as part of the reconciliation process between Ankara and Kurds has been welcomed by all. Commenting on Öcalan's disarmament call, high senior officials, political party representatives and the EU described the call as a significant step. President Recep Tayyip Erdoğan said that the call for disarmament is a significant step to finalize the reconciliation process, but what really matters is its execution.

The president gave a press statement before he took off for Saudi Arabia on Saturday and commented on the call for disarmament. He emphasized the importance of its implementation and highlighted that the PKK should be the one to lay down its arms, not the Turkish Police or Army. "Such expectation would only be a dream," he said.

Erdoğan added that the sincerity of both sides will be tested and that the government has taken remarkable steps to meet the demands of Kurdish people. "We abolished discriminatory policies," he said, and that the government is making serious investments in the region is a token to display its sincerity for resolving the issue. Following the historic disarmament step, three steps are reportedly expected to be discussed to further the reconciliation process between Ankara and Kurds.

As the first step, the prisoners on İmralı Island, where Öcalan is serving a life sentence, will be transferred. The Peoples' Democratic Party (HDP) demanded a transfer of prisoners before as the incoming prisoners are expected to help Öcalan in his studies. The second step said that prisoners aged between 20 and 40 years will be released with a decision from the Turkish Forensic Medicine Institution. The third step is expected to set up a monitoring commission, including certain names who led the Wisemen Committee before.

The reconciliation process has taken new shape with Öcalan's call on Saturday for the group to lay down its arms, Prime Minister Ahmet Davutoğlu said. Davutoğlu spoke at the Justice and Development Party's (AK Party) youth congress on Saturday in Ankara. He said: "The reconciliation process, which began with [then Prime Minister] Erdoğan's speech in Diyarbakır in 2005, has now taken new shape." Öcalan's invitation to find a common ground on the PKK's disarmament will pave the way for a democratic policy in Turkey, according to Davutoğlu. The prime minister further said the discourse of violence and armaments will end in Turkey.

On Sunday, the Kurdish Communities Union (KCK), an umbrella organization including the PKK, made a statement that it considers the call to be a historic step toward peace.

"We consider Öcalan's call for a new congress to lay down arms as a historic step. Regarding the 40-year conflict, the government should take this call into consideration and meet the requirements regarding the 10 articles that Öcalan emphasized."

Saying that they expect the government to take concrete steps and to have a political response to the call, the KCK administration said: "As long as the government fulfills its responsibilities in the process, we openly declare that we too will fulfill our obligations. One should not forget that even a consolidated cease-fire is an important opportunity for steps for the solution in itself."

Öcalan's message was shared with the public by the HDP during a press conference on Saturday. The press conference took place after Deputy Prime Minister Yalçın Akdoğan held talks at the prime minister's office in Istanbul with the HDP committee, including HDP Vice Chair İdris Baluken and HDP Deputies Sırrı Süreyya Önder and Pervin Buldan, on the reconciliation process. Both sides emphasized the importance of a cease-fire and said that Turkey is closer to peace than ever before.

Önder said that the dialogue between the two parties on the reconciliation process has reached a "serious" stage, and shared Öcalan's message, in which he invited the PKK to hold a congress in the spring to make its historical decision to find common ground on the issue of laying down arms. Önder said that the invitation is a historic declaration of intention to resolve the issue through democratic politics instead of armed struggle. He said that their main target is to reach a democratic solution while trying to resolve the 30-year conflict permanently. He said: "We call on all pro-democracy fronts and peace supporters to back the democratic debate in the reconciliation process in Turkey."

Following the imprisoned PKK leader Abdullah Öcalan's call on the PKK to lay down its arms, main opposition Republican People's Party (CHP) Chairman Kemal Kılıçdaroğlu welcomed the disarmament call by posting on his Twitter account: "Peace cannot be maintained under the shadow of arms. Disarmament is a step that will bring peace to these lands."

CHP Group Deputy Chair Levent Gök also remarked on Öcalan's call and said that "if arms are laid down, we would find it useful and feel pleased."

Chairman of second opposition party in Parliament, the Nationalist Movement Party (MHP), Devlet Bahçeli said that he did not believe the PKK's sincerity for disarmament and MHP Deputy Chair Oktay Vural harshly criticized the disarmament call made as part of the reconciliation process and accused the government treason.

The European Union has welcomed imprisoned PKK leader Abdullah Öcalan's call to disarm, according to a statement. At a joint press conference by the government and the Peoples' Democratic Party (HDP), the statement read, "The EU welcomes today's announcement of Abdullah Öcalan's call to the PKK to hold an extraordinary congress to decide to lay down arms in the spring." This was reiterated by Deputy Prime Minister Yalçın Akdoğan, as being a positive step forward in the reconciliation process: "We hope that all parties will seize the opportunity to make decisive progress toward reconciliation and democratization. As ever, the EU gives the strongest political support to this process and repeats its readiness to provide practical help, including through pre-accession funding.
Last Update: Mar 02, 2015 10:04 am
RELATED TOPICS