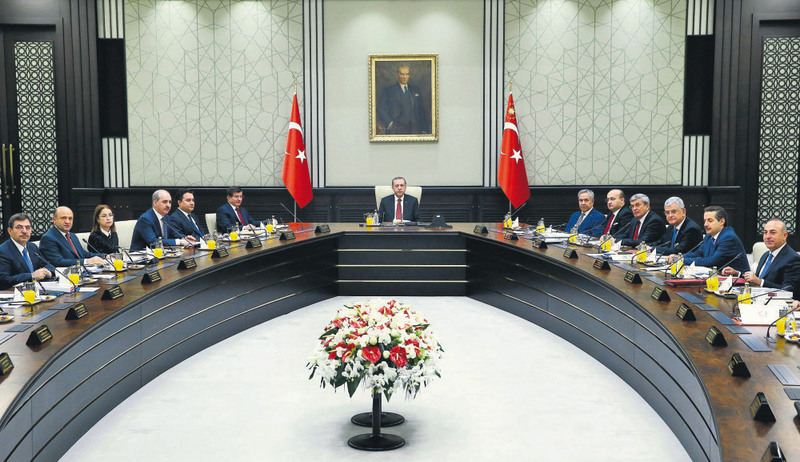 President Recep Tayyip Erdoğan chaired his second Cabinet meeting of 2015 at the Presidential Palace on Monday, March 9. The meeting's agenda addressed significant topics such as the reconciliation process, Domestic Security Reform Package and the recent fluctuations in the status of the Turkish lira. In addition to these topics, Turkish Air Force Commander Gen. Akın Öztürk also attended the meeting to discuss the recent crashes of F-4 fighter jets in Turkey. In addition to Öztürk, General Hulusi Akar, commander of the Turkish Land Forces also attended the meeting to reportedly provide the recent developments on the new location of the Tomb of Süleyman Shah, as well as to inform Cabinet members of the Turkish Land Forces' preparations for any possible regional threats. It has also been reportedly claimed that Akar discussed Turkey's position in regard to a Mosul operation against the Islamic State of Iraq and al-Sham (ISIS).

The Cabinet meeting held at the Presidential Palace in Ankara was attended by a number of new figures such as Kenan İpek, who was recently appointed as Justice Minister as a result of Bekir Bozdağ's announcement of resignation according to election regulations at a conference on Friday. Additionally, newly appointed Interior Minister Sebahattin Öztürk attended the meeting for the first time as former minister Efkan Ala resigned due to the election regulations as well.

Additionally, the extradition of U.S.-based imam Fethullah Gülen, who is alleged to have orchestrated the December 17 and December 25 operations to overthrow the Turkish government, was discussed at the Cabinet meeting and the action plans of government institutions against the "parallel structure" was included on the agenda of the meeting.

Cabinet meetings are seen as an effort to fortify cooperation between presidential and prime ministerial mechanisms and a step forward in switching from the parliamentary to a presidential system. In addition, according to the Constitution, the president is the head of state. In this capacity the president can preside over Cabinet meetings if he or she deems it necessary.
Last Update: Mar 10, 2015 9:50 am
RELATED TOPICS