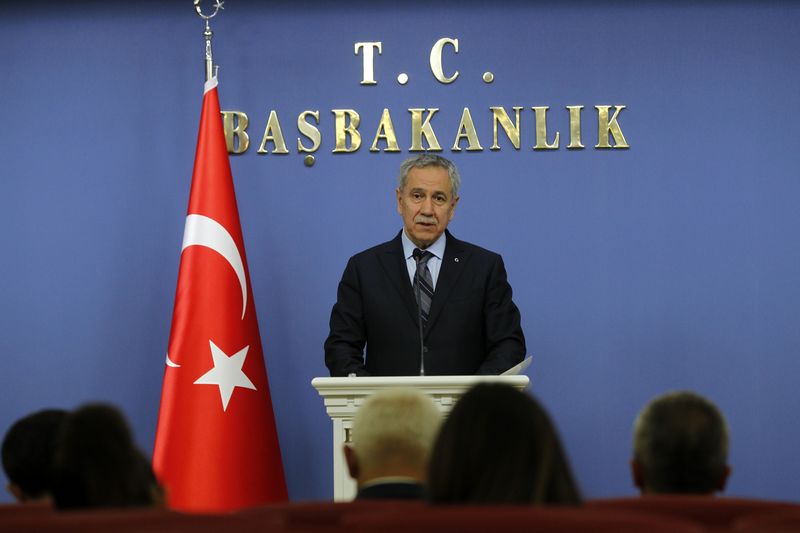 by Ayşe Şahin Mar 10, 2015 12:00 am
Deputy Prime Minister Bülent Arınç said on Monday that the United Nations is failing to generate solutions for providing assistance to Syrian refugees in Turkey and lacks power. His comments alluded to the recent move by the U.N. food agency to cut aid to nine Syrian refugee camps located in Turkey citing a lack of funds.

President Recep Tayyip Erdoğan chaired his second Cabinet meeting on Monday focusing on national security, the reconciliation process, security reform, the Gülen Movement and recent economic developments. In a question-and-answer session with journalists following the Cabinet meeting, Arınç touched on the recent announcement by the U.N. to reduce aid to Syrian refugees in Turkey and said: "It indicates the incapacity of the U.N. and lack of ability to come up with solutions. The secretary general of the group could be a person with good intentions, but if the body continues in this way it will become nothing more than an institution that strives for deadlock.

On March 6, the U.N. food agency announced that it had to reduce its aid to nine Syrian refugee camps located in Turkey due to a lack of funds, calling for additional funds to continue the program for the refugees.

"Unfortunately, in February, we were forced to ask the Turkish government to take over assistance in nine camps where we could not continue providing aid because we lack funds," said World Food Program (WFP) spokeswoman Elisabeth Byrs at a press briefing in Geneva.

Underscoring that the WFP's deficit in the 2015 aid program in Turkey is $71 million and that it needs $9 million each month to deliver food aid to Syrian refugees in the country, Byrs called for more funding.

She said that the agency has been supporting 220,000 refugees in Turkey each month, and planned to reach 300,000 in 2015, but last month it had to reduce the number of people who benefit from the organization's aid to 154,000. Noting that the Turkish government stepped in to close the funding gap, Byrs urged other donors to provide assistance as Turkey has taken in nearly 2 million refugees since the beginning of Syrian civil war.

Arınç, recalling that the government spent $5 billion on the refugees it shelters, said: "Other institutions have not even provided 1 percent of this figure. The U.N. had to cut aid due to a lack of funds and said, 'let's look for new sources.' On the other hand AFAD [the Disaster and Emergency Management Authority] has come to a point to undertake all the assistance that makes no further support necessary."

Arınç, in hard-hitting words that target the U.N., said the matter had no influence on the condition of the refugees and that the U.N. is the one to be ashamed.

"If they have reduced to such a desperate level that they can no longer make donations, then it is their problem. Turkey will continue providing assistance," Arınç added.

Turkish officials have already been complaining about the lack of assistance of Western countries. The latest in a series of complaints has come from Erdoğan, who called on the world to stand by the nearly 2 million refugees fleeing the turmoil in Syria and Iraq.

"What have [Western countries] done for the rights of the 2 million Syrian and Iraqi people sheltering in Turkey?" Erdoğan asked, adding that even though the West praises Turkey's support of the refugees, only 150,000 refugees have been provided shelter.

Turkey began hosting thousands of war-torn Syrian refugees who fled the violence that surfaced with the civil war in 2011 and continued apace with the increasing threat of the Islamic State of Iraq and al-Sham (ISIS) in the country.