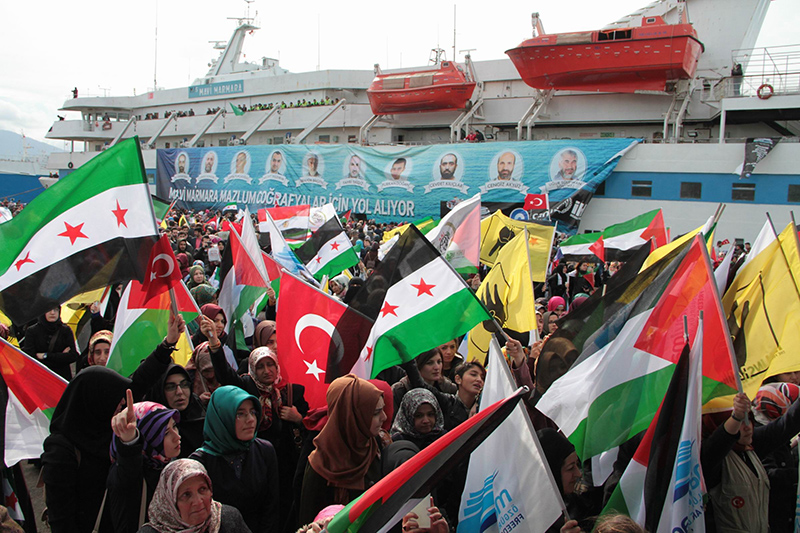 by Ayşe Şahin Mar 11, 2015 12:00 am
A new judicial phase has kicked off at the International Criminal Court (ICC) after Turkey filed an objection to the previous ruling handed down by the court in November 2014, in which it decided not to investigate an Israeli raid on the Mavi Marmara aid ship for Gaza, deeming the crime's "gravity" inadequate. The court is now expected to deliver another ruling on March 30, which Turkey hopes will be in its favor.

The Turkish charity Humanitarian Aid Foundation (IHH), which had taken the Israeli raid on the Mavi Marmara aid ship to the ICC, objected to the ICC's decision not to investigate the attack, claiming that the raid was a "continuation of Israel's attacks on Gaza." Prosecutors at the ICC said the court reached the decision despite the presence of a "reasonable basis" to believe Israeli soldiers had committed war crimes during the raid. The prosecutors explained that although there were adequate grounds to believe war crimes were committed by Israeli soldiers during the raid, the crimes in question did not have enough gravity for the court to launch an investigation.

In May 2010, Israel raided the Mavi Marmara flotilla while the ship was trying to break the blockade imposed on Gaza by Israel, and was part of a larger flotilla organized by the IHH. Before it could reach the Gaza coast, the boat was forcefully boarded by Israeli forces and eight Turkish nationals and a Turkish-American were killed as a result of the attack.

The secretary general of the IHH, Yavuz Dede said that the charity has submitted a new petition of objection to the decision by the ICC, demanding that Israel be punished.

"The prosecutor of the case had the mentality that if 100 people had been killed instead of 10, they could have looked into the case. Since the crime was not grave enough, the court decided not to investigate the attack. Our lawyers have objected to the decision. They are in a new phase right now. There will be a new session soon in which another ruling will be handed down."

Underscoring that they will continue their struggle to the end, Dede also said: "We expect a humane ruling by the court. We will see by this means whether the court is neutral or not. Whether or not Israel can be tried will be revealed."

Claiming that the petition included solid evidence and a strong basis for Israel to be tried for attacking the raid, Dede continued: "Justice should be served and all those Israelis responsible for the raid should be tried immediately. Otherwise, the ICC will lose its legitimacy. It has come to this point."

Meanwhile, the eighth hearing of the ongoing trial in Turkey took place on March 11. IHH Chairman Bülent Yıldırım said they demanded the red bulletin that was issued against Israeli generals to be sent to Interpol. He further said they will not give up their fight and that they believed Israel needs to be put on trial.

Recalling that the Turkish court has ruled for the arrest of the Israeli officials, Yıldırım said: "We want the red bulletin to be sent to Interpol. We cannot understand why a decision made by an independent court cannot be sent to Interpol." He added that they had requested Prime Minister Ahmet Davutoğlu's support on the matter.

Yıldırım gave a press statement ahead of the hearing. In response to the allegation that Israel had offered $1 billion to the relatives of the raid victims and that it would loosen the Gaza blockade if necessary, Yıldırım confirmed that they had been offered a blank check.
"If we accept, they have offered to extend opportunities to have a share in natural gas" Yıldırım said, adding that they could not accept the offers since they would be a cause of distress for Palestinians.