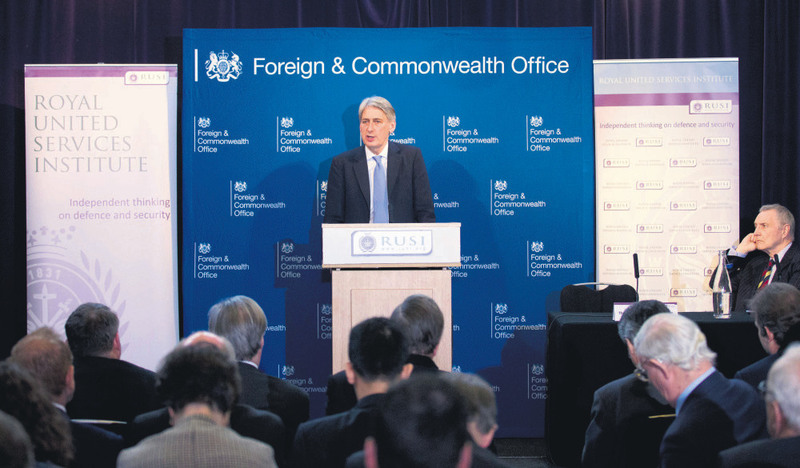 by Anadolu Agency Mar 12, 2015 12:00 am
British Foreign Secretary Philip Hammond said Tuesday that he was appreciative of Turkey's efforts to block foreigners who attempt to cross the border into Syria. Turkey is often accused of not being able to control its more than 800-kilometer-long border with Syria, sometimes referred to as a "highway" to war-torn Syria.

"Turkey faces a huge challenge as a principle transit route for people moving to and from Syria," Hammond said while speaking at the Royal United Services Institute on Intelligence and Security (RUSI) in London. "I spoke with the Turkish foreign minister precisely about this point on Saturday."

"I would like to recall publicly our appreciation of the support we get from Turkish authorities," he added. "We are all learning as we go on." Answering a question about the particular case of the three school girls from East London that likely traveled to Syria via Turkey, Hammond said that the case had identified certain weaknesses. He said: "[There are] some things that we can improve, but also ... some steps that people in the community have to take to keep us safe." Shamima Begum, 15, Amira Abase, 15, and Kadiza Sultana, 16, left Bethnal Green Academy in East London in early February for Turkey, and then reportedly crossed into Syria to join the extremist Islamic State of Iraq and al-Sham (ISIS), which operates in Syria and Iraq. Hammond said that parents, schools and community workers as well as other authorities, airports and airline operators have responsibilities.

"It's about coming together, in this case to protect children, minors, juveniles, who must be protected from themselves, going about something that will be deeply damaging to their own interests as well as our national security intersects," Hammond said. The Turkish ambassador to London, Abdurrahman Bilgiç, will speak Tuesday to the Internal Affairs Committee of British parliament regarding the three British teenage girls who allegedly went to Syria through Turkey. The Scotland Yard chief and the families of the three teens will also speak to the committee.

The British government estimates that as many as 600 people have left Britain to go to Syria and Iraq.
Last Update: Mar 12, 2015 1:11 am
RELATED TOPICS