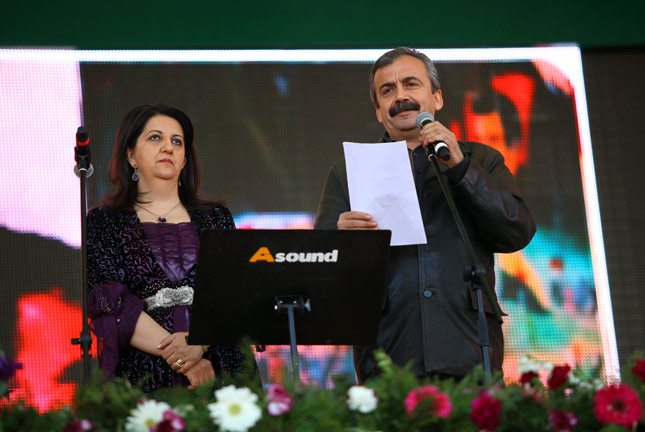 The HDP has demanded that the government allow jailed PKK leader Abdullah Öcalan’s Nevruz message, which will not be issued through a letter this time, but rathar via a video or audio message. Öcalan is expected to reaffirm his call for the PKK to permenantly lay down arms

Peoples' Democratic Party (HDP) Parliamentary Group Co-Chair Pervin Buldan said her party is demanding that the government allow jailed PKK leader Abdullah Öcalan issue his Nevruz message via video or audio message, as opposed to a letter, which has been the case for the past several years. Nevruz is a spring festival celebrated mostly by Kurds in Turkey. Buldan's statement came after Deputy Prime Minister Yalçın Akdoğan said the annual March 21 Nevruz festival, which marks the beginning of spring, will be a key milestone for the country's Kurdish reconciliation process.

Last month Öcalan called on the PKK to lay down its arms. Öcalan's message was shared with the public by the HDP at a press conference that took place after Akdoğan held talks at the prime minister's office in Istanbul with the HDP committee on the reconciliation process. Both sides emphasized the importance of a cease-fire and said that Turkey is now closer to peace than ever before.

Nevruz is an important traditional and cultural event for Turkey's Kurdish population, which also coincides with the 2013 call by Abdullah Öcalan, the imprisoned leader of the PKK, to withdraw all armed elements from Turkey as of May and June of 2013 and put an end to armed conflict.

"We will hopefully burn all conflict, violence and weapons in the fire of democracy on Nevruz," Akdoğan said in an address at the Turkish Union of Chambers and Commodity Exchanges (TOBB) in Ankara.

In another historic step forward in the reconciliation process, a government initiative that officially started in early 2013 to end the decades-old conflict with the PKK, Öcalan also made a call on February 28 for PKK members to hold a conference to discuss disarmament.

Akdoğan, who is leading the talks on the reconciliation process on behalf of the government, hailed the call for the PKK to lay down its arms as historically important. "We need to first acknowledge that politics is the platform for all kinds of problems to be discussed and resolved," he said.

In order to achieve a settlement, he said the government does not hesitate to talk about or debate any problem: "Even the most unusual ideas and opinions that we find hard to accept could be discussed freely on the grounds of democracy."

He stressed that Turkish democracy now has the capability to solve any problem, adding that it is in their hands to further improve it.

"There is no room for weapons in the presence of democracy. If there are weapons, then there is no belief in democracy," he said.

Akdoğan reiterated that the problem needs to be settled through cooperation, which he said lays great responsibility on everyone's shoulders.

He also emphasized that the drafting of a new constitution will be a key opportunity to solve chronic problems.

Following his address, Akdoğan attended a meeting held once every two weeks under the chairmanship of Prime Minister Ahmet Davutoğlu to review the latest progress in the reconciliation process, in which he said they will also discuss the issues and reports brought by the chairmen of trade unions coming from the eastern and southeastern regions of Turkey.

The meeting was also attended by Hakan Fidan who returned Tuesday to his previous post as Turkey's intelligence chief, after he withdrew his candidacy in the June 7 general elections.

The PKK is listed as a terrorist organization by Turkey, the U.S. and EU and its attacks have claimed around 40,000 lives in Turkey over the last three decades.