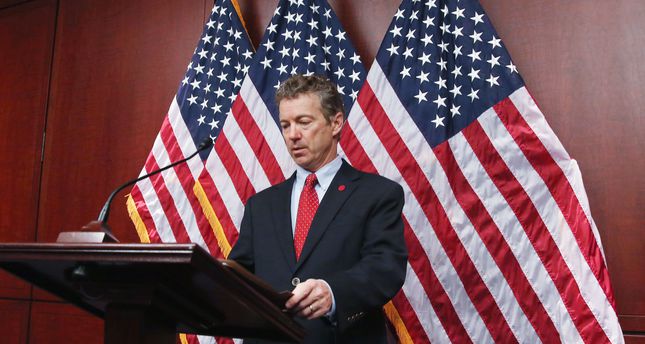 by Merve Aydoğan Mar 13, 2015 12:00 am
As the 2016 U.S. presidential election slowly approaches, one of the possible candidates, Kentucky Republican Senator Rand Paul, made statements during an interview with Breitbart on Tuesday in which he said that the U.S. should provide arms to the Kurdish fighters and added: "I would draw new lines for Kurdistan and I would promise them a country."

The senator continued his remarks by adding that U.S. foreign policy regarding Kurds was not sufficient and added: "I think if you [create a Kurdish state you] could get peace between the Kurds and the Turks." Rand's statements portrayed his lack of knowledge about regional dynamics and Turkey's Kurdish citizens, the majority of whom oppose any sort of separation and also the PKK, which fought for decades seeking autonomy, but has said it no longer seeks autonomy in the predominantly Kurdish areas of southeast Turkey.

While Paul drew ire by calling for a Kurdish state on Turkish soil, he also joined a number of Republicans to push U.S. President Barack Obama to further support Iraqi Kurdistan Regional Government (KRG) peshmerga forces directly with military aid against the Islamic State of Iraq and al-Sham (ISIS). Paul's idea of promising Kurds a Kurdish state in some of the lands of Kurdistan, a region that is spread across four different nations that encompass regions of Turkey, Iran, Iraq and a small part of Syria where Kurds have historically lived, is problematic to say the least. Some refer to modern American imperialism as its international economic, military and cultural influence, and Paul's promise to give the land of Kurdistan which also includes Turkey's territories stirred discussions of a possible revitalization of U.S. imperialism.

During the interview, Rand also said: "The Kurds are the best fighters. The arms are going through Baghdad to get to the Kurds and they're being siphoned off and they're not getting what they need."

"I think they would fight like hell if we promised them a country. It's a little easier to say than it is to actually make it happen, because in order to actually draw a new country you'd have to have the complicity of Turkey and probably Iraq a little bit as well," he said. He also commented on the Islamic State of Iraq and al-Sham (ISIS) saying that "there can't just be Arab boots on the ground they need to be Arab Sunni boots on the ground to take back the areas that are predominantly Sunni."