HDP and Ankara accelerate reconciliation process ahead of disarmament call 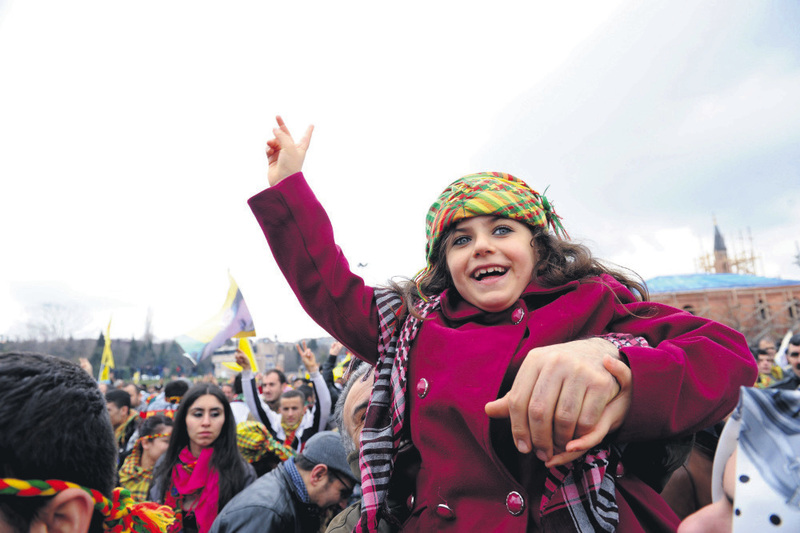 by Ayşe Şahin Mar 14, 2015 12:00 am
The reconciliation process that the government launched in a bid to end the decades-long insurgency of the outlawed PKK has gained momentum after incarcerated PKK leader Abdullah Öcalan's call for disarmament. The Peoples' Democratic Party (HDP) committee visited İmralı Island on Friday where Öcalan is imprisoned. Deputy Prime Minister Yalçın Akdoğan and HDP Co-Chair Pervin Buldan held a meeting in Parliament late on Thursday to discuss Öcalan's planned call for disarmament in Diyarbakır, which is expected to take place during the annual March 21 Nevruz festival.

The reconciliation process, which has recently been on shaky ground as a result of numerous provocations, appears to have settled again after Öcalan called on PKK leadership to hold a congress to discuss laying down its arms. The HDP and the government have been holding official talks to speed up a conclusion, which the whole of Turkish society is growing impatient for. Akdoğan recently said the Nevruz Festival, which marks the beginning of spring, will be a key milestone for the country's reconciliation process. Following his remarks, Buldan said her party is demanding that the government allows Öcalan to issue his Nevruz message via video or audio message, as opposed to a letter, which has been the case for the past several years. HDP Co-Chair Selahattin Demirtaş also supported the idea that Öcalan's message should be issued via video, which he said would contribute to the conclusion of the process.

While discussions of how the message will be issued continue, Akdoğan and Buldan meeting inspired various speculations, which were published on news outlets claiming that a monitoring board consisting of 16 people has been established and will head to İmralı. However, the claims were debunked after Akdoğan said the allegations were 'false.' The HDP also released a statement clarifying the matter. "The demand of a monitoring board was conveyed to the government [during the meeting], but the names that [ran in the papers] were not discussed." On Friday, Demirtaş also confirmed that no names were put forth for the monitoring board during the meeting.Meanwhile, the İmralı committee, which consists of members of the HDP, paid a visit to hold talks with Öcalan to accelerate the reconciliation efforts.

Now, all eyes have turned to the Nevruz Festival, during which Öcalan is expected to make a call to the PKK to lay down its arms.

Nevruz is an important traditional and cultural event for Turkey's Kurdish population. It also coincides with a previous call made by Öcalan in 2013 to withdraw all armed elements from Turkey as of May and June 2013 and put an end to the armed conflict.

HDP Deputy Sırrı Süreyya Önder, who quoted Öcalan, said on Feb. 28 that Öcalan's call for a congress was a manifestation of his intention to disarm. Önder also read out the ten items that will constitute the basis of the negotiations. Developments following Öcalan's call illustrate that both sides of the reconciliation process have a genuine will to conduct the process and to bring it to a conclusion. The disarmament will restart negotiations that have stalled due to attempts to cripple the reconciliation process.

The PKK is listed as a terrorist organization by Turkey, the U.S. and the EU, and its attacks have claimed around 40,000 lives in Turkey over the last three decades.
Last Update: Mar 14, 2015 12:21 pm
RELATED TOPICS