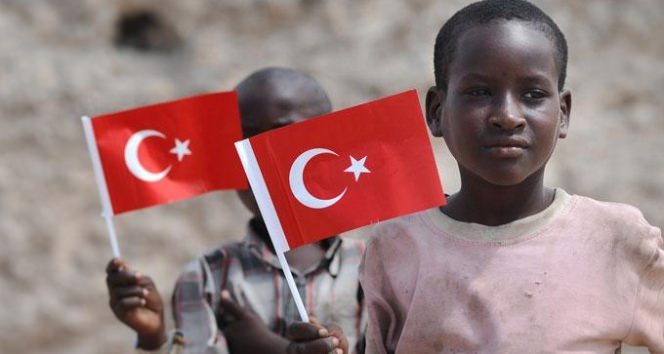 | Photo Credit: IHA
by Büşra Akın Dinçer Mar 16, 2015 12:00 am
The Daily Sabah Centre for Policy Studies is launching the first of its conference series on Turkey in London. An exclusive panel, "Turkish Foreign Policy in Somalia: Humanitarian or Strategic?" will take place in one of the most prestigious universities of the city, the University of London's School of Oriental and Africa Studies (SOAS), on March 20, with the attendance of well-known experts.

Somalia has seen Turkey play a greater role in its development since President Recep Tayyip Erdoğan's visit in 2011. The visit was intended to provide humanitarian aid to the country and plan infrastructure, but more importantly, it was intended to draw the attention of the world to Somalia.

Turkey's comprehensive involvement in Somalia made visible changes to the country in many areas from health to infrastructure. In addition to this, bilateral agreements between the countries have been signed, including treaties to train the Somali national army and Turkish Airlines started flights to Mogadishu. Turkey's efforts paid off and the growing relationship between the two countries attracted the world's attention to the region.

There are both proponents and critics of this relationship. The think tank extension of Daily Sabah, Daily Sabah Centre for Policy Studies, is holding an exclusive panel, "Turkish Foreign Policy in Somalia: Humanitarian or Strategic?" organized to comprehensively analyze Turkey's increasing diplomatic involvement in Africa. The conference will take place in London, one of the most strategic cities in Europe. SOAS will be hosting the panel on Friday, March 20 from 8:00 p.m. to 10:00 p.m. in association with the SOAS Somali Society.

There will be experts from both Turkey and Europe on the panel to share their points of view on the matter. Dr. Kani Torun, a former ambassador to Somalia from Turkey from 2011 until 2014, which was the period that saw increasing bilateral relations between Turkey and Somalia, will be attending the conference from Turkey to represent a Turkish view on the topic. During his stay in Somalia, Torun established a permanent diplomatic residence in Mogadishu. He also effectively coordinated Turkish humanitarian assistance including the reconstruction of main roads, hospitals and establishment of schools in Mogadishu.

Abdurahman Sharif is another speaker who will give his insight on the issue. He is the executive director of the Muslim Charities Forum. He previously held the post of director at the Somali Development Forum. Sharif holds two master's degrees, one in linguistics from the University of Sorbonne in Paris and another in development studies from the University of Pavia in Italy.

An associate fellow at the Africa Program at Chatham House, Jason Mosley, will also attend the conference as an expert on the region. He is also the managing editor of the Journal of East African Studies. His current research is focused on the impact of multilateral regional organizations on stability on the Horn of Africa and on linkages between state-building, foreign investment and security in peripheral regions in East Africa and the Horn of Africa.

The Daily Sabah Centre for Policy Studies aims to provide a broader understanding through organizing various conferences within the framework of Turkish socio-politics and its reflections at the regional and global level.