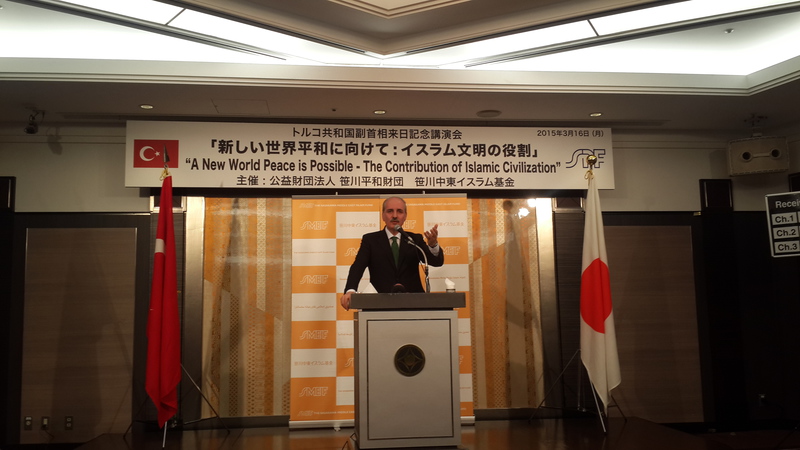 by Ali Ünal Mar 16, 2015 12:00 am
Deputy Prime Minister Numan Kurtulmuş claimed that a new era of world peace is possible with the implementation of Islamic values. Speaking at the conference "A New World is Possible: The Contribution of Islamic Civilization," which was hosted by Japan's leading think tank, the Sasakawa Peace Foundation, in Tokyo, at the end of his visit to Japan on Monday, Kurtulmuş claimed that during the five centuries of the Ottoman era, no conflict or dispute took place in the Balkans or Middle East. Defining this period as the "Pax Ottomana," Kurtulmuş said that Muslims and Christians from different faith and creeds, people from different ethnic backgrounds, large or small, were able to live together during these period.

Kurtulmuş claimed that a new "Pax Ottomana" period is possible, and said that Islam gives five recommendations and places five criteria as a condition to build a new period. According to Kurtulmuş, these five recommendations are: human rights, as "humans are created as equals;" freedom, as "people's freedom of choice;" "justice;" equality, as "putting the earth and the whole universe under the humans' order;" and, common sets of truth acceptable to anyone with reason and conscience, regardless of their religion, race, class or belonging.

"To implement all the values and criteria I have mentioned in my speech, it has inevitably brought to our minds the question of what should be done to establish the practices of a 'nova pace' or how such a 'pax' can be made possible. Answering this question will show that all these principles we have mentioned until now remain, or are even condemned, to be only a theory or ideology," Kurtulmuş.

Describing Islam as a religion of peace, Kurtulmuş underlined the fact that it is unfair to associate Islam with terror and violence. He expressed his condolences to the Japanese people for the two Japanese citizens killed by the Islamic State of Iraq and al-Sham (ISIS) in Syria.

Pointing out that the Middle East was peaceful during the period of the "Pax Ottomana," Kurtulmuş underlined that the peace was established owing to criteria that was conceptualized as the Ottomans' Jerusalem criteria. "I conceptualize this as the Ottomans' Jerusalem criteria, which was based on five fundamental rights. The first being freedom of belief, the second freedom to live as you believe, the third was freedom for people to establish their own civil associations related to their own religion and culture, the fourth was the right to free trade and the fifth was freedom of movement. Now, what do those criteria evoke to you? The European Union's Copenhagen Criteria, indeed," Kurtulmuş said.

"So this was a system that protected, long before the Copenhagen Criteria were defined, rights, freedoms and laws that are much more developed. If you establish such a structure and government in your society, you can also establish a fair peace, or 'pax,' in your territory, or even the world," he added.