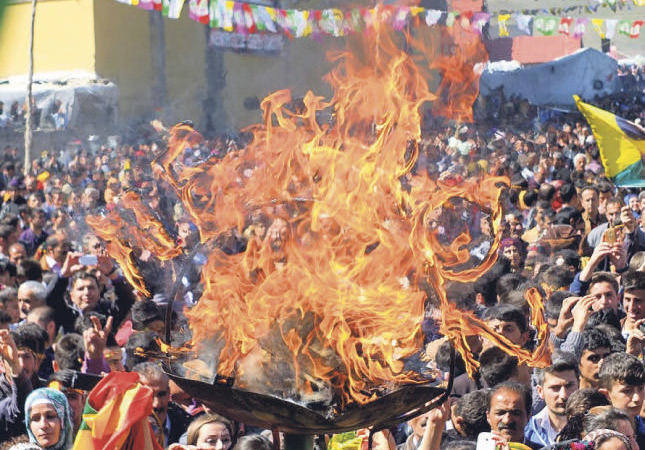 The PKK's disarmament which is expected from of the its imprisoned leader Öcalan’s message for the Nevruz festival on March 21, will provide momentum to the government-initiated reconciliation process to end the Kurdish question, experts believe

The reconciliation process, which the Turkish government launched in a bid to solve the Kurdish conflict between the state and the outlawed PKK, is expected to enter a new phase during the Nevruz festival, which is annually celebrated on March 21.

Turkey, which has already been enjoying the cease-fire announced by the PKK'S incarcerated leader during the Nevruz festival of 2013 as part of the reconciliation efforts, is now looking to Abdullah Öcalan to further exert his influence by calling for disarmament. This is a widely anticipated move following the words of the Peoples' Democratic Party (HDP) deputy Sırrı Süreyya Önder, who quoted Öcalan, saying that on Feb. 28, his call for a congress was a manifestation of his will for disarmament.

Nevruz, which is an important traditional and cultural event for Turkey's Kurdish population, is a more strategic date for Turkey than ever before, as it marks the closest the state has come so far to reaching a conclusion in the reconciliation process. All eyes have turned to the message Öcalan will convey this year on Nevruz, which Turkey hopes will be different from previous years' messages. Talks have been held between state officials and the mediator deputies of the HDP; the PKK has ramped up efforts to prevent any provocations that might have a ruinous effect on the fragile process, and HDP deputies have paid visits to İmralı Island where Öcalan is imprisoned to accelerate the process. Developments following Öcalan's call have illustrated that both sides of the reconciliation process have a genuine will to conduct the process and to bring it to a conclusion. Columnist and Kurdish political expert, Kurtuluş Tayiz, said that this year's Nevruz can be deemed as an intersection of the transformation of the Kurdish movement. He said that they will either choose to bring the movement to the political level or remain an insurgency. About the expected call for disarmament by Öcalan in his Nevruz message, Tayiz said, "He has already expressed his willingness to disarm. He will detail his order and try to convince his own followers." When asked if there is a chance that the PKK will not comply with Öcalan's call, he said it is theoretically possible yet, but technically it could only be stalled. "They will, sooner or later, have to drop their arms. This is inevitable," Tayiz added.

Kurdish Author Vahdettin İnce also shared similar thoughts on the subject and said the reconciliation process has reached a stage where no regression can occur.

"There has been a huge expectation over the disarmament message from Öcalan. Society has been growing impatient about it. His message, which I think will note the date when the congress will be convened, will cement the process," İnce said, adding that the disarmament will definitely happen.
Meanwhile, Prime Minister Ahmet Davutoğlu will participate in his Justice and Development Party's (AK Party) Nevruz festivities to be held on Saturday in Istanbul, where the focus will be on the continuing reconciliation process and similar celebrations taking place across the country in Diyarbakır.

Turkey's reconciliation process, which has been on shaky ground due to various provocations, has thus far become more settled after Öcalan called for a congress to convene to discuss de-arming three weeks ago. HDP deputy Önder, who read out the statement live, said his call for a congress could be deemed as his wish for laying down arms. Önder also read out the 10 items that will constitute the basis of the negotiations. The disarmament will restart negotiations that have stalled due to attempts to cripple the reconciliation process. The HDP has made some demands over how the negotiations should be carried out, one of which is the establishment of a monitoring group for the process, but Turkish President Recep Tayyip Erdoğan said on Friday that he was not in favor of the idea.

The process was launched by the AK Party in 2012 when former prime minister, President Recep Tayyip Erdoğan, announced in December of the same year that the government was holding peace talks with Öcalan. Roughly three months after this announcement, Öcalan delivered a landmark message during the Nevruz celebrations in March, in which he called for a cease-fire. In July the following year, the Turkish Parliament passed a bill to support the country's ongoing reconciliation process to end terrorism.
Last Update: Mar 21, 2015 8:49 pm
RELATED TOPICS