Deputy PM: No rift with Erdoğan, gov’t will follow his strategy on Turkey's reconciliation 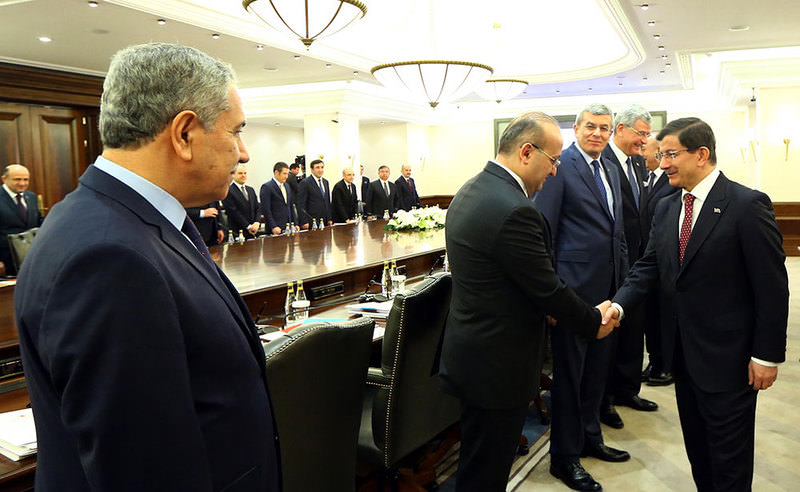 Deputy PM Arinc (left) prior to the cabinet meeting held first time at former presidential compound in Cankaya, Ankara, now serving as the prime ministry | Photo:AA
by Daily Sabah Mar 23, 2015 12:00 am
Deputy Prime Minister and Government Spokesman Bülent Arınç said that his highly-debated statements on the reconciliation process and President Recep Tayyip Erdoğan's stance on the process were solely made by himself. He also ruled out the allegations that he held talks with Prime Minister Ahmet Davutoğlu prior to his press statements, which were portrayed by some media outlets as indicative of a rift between the president and the government.

"There have been certain reports in the media, which aimed to portray a rift between myself and the president. I would not get into an emotional debate with Erdoğan, especially when we have gone through walls of fire together throughout our political life. The relationship between ourselves is a strong one based on our ideals. Thus, if you were to analyze the statements I made, you will see no polemics between myself and the president, whose post is the head of state. If he was unaware of certain developments, it would be our fault for not informing him well enough," Arınç said.

Arınç added that the government should inform the president about the developments on the reconciliation process more frequently, which he said they failed to do so up until now. "We will follow the roadmap that he will draw after being informed on the latest developments, as he is the one who launched the process," he said.

On Monday, a couple of AK Party members, the most prominent being Ankara Mayor Melih Gökçek, called for Arınç's resignation and accused him of allegations ranging from being an instrument of the opposition to creating disagreement within the AK Party, to having ties with the Gülen Movement. In response, Deputy PM Arınç has strictly condemned the allegations, saying that he perceives the Gülen Movement as a threat against the state. Arınç also said the Mayor Gökçek is making these allegations purely for his personal benefit, and that he had been opposed to Gökçek's candidacy in 2009 along with other prominent party figures.