Parliamentary speaker Çiçek: ISIS can be destroyed by removing Assad 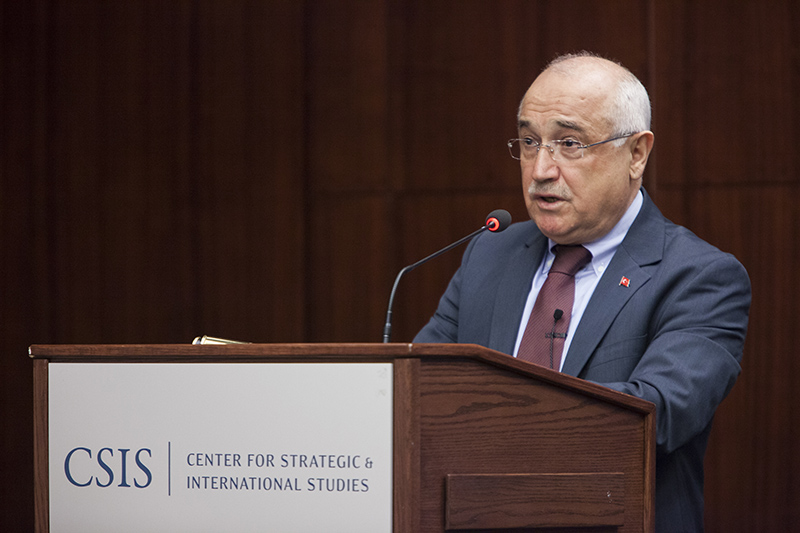 | Photo: AA
by Anadolu Agency Mar 25, 2015 12:00 am
Turkish Parliament Speaker Cemil Çiçek said on Tuesday that ISIS could be defeated only by retaining stability in Syria, possible only by the removal of the Bashar al-Assad regime.

"As long as the Assad regime is there it will not be possible to defeat and uproot the most merciless and bloody terror group, ISIS." Çiçek said at the Washington-based Center for Strategic International Studies.

The way to end the civil war in Syria and eliminate the Islamic State of Iraq and al-Sham (ISIS) or similar groups posing a threat to the region is a real and viable political transition in the country, he added.

He said as a partner in the U.S.-led coalition against the militant group, Turkey has fulfilled all its responsibilities, but the challenge is one that a single state can not overcome by itself.

"Turkey has been cracking down on the foreign fighters crossing the country into Syria, the oil smuggling controlled by ISIS and has signed the train-equip program for the moderate Syrian opposition groups with the U.S.," he said, noting that has been some disinformation with respect to Turkey's efforts.

Turkey has been blamed for failing to stop the flow of foreign fighters attempting to join ISIS militants.

He said Turkey has stopped the entry of 12,550 individuals from 93 countries who were on their way to join ISIS, while deporting 1,200 travelers from 78 countries, including 16 from the U.S.

The speaker also said Turkey has sealed off eight of its gates with Syria while five remain open for humanitarian aid and commercial passages.

Çiçek noted, however, the difficulty in controlling an 800-mile (1,300 kilometer) border, giving the example of the U.S.-Mexican border.

"Although the U.S. has allocated billions of dollars, increased its border security personnel and fenced up the border with Mexico, hundreds of thousands of people cross the Mexican border with the U.S.," he said.

Çiçek also said Turkey has hosted more than 2 million refugees fleeing the Assad regime or ISIS - regardless of their religious beliefs or ethnic background - while adding that the Western world has so far accepted about 130,000 refugees from Syria.

"The struggle against ISIS should be based on international cooperation. It's not fair to leave the entire burden on the shoulders of Turkey," he added.

The speaker also touched on the Kurdish Workers Party, or PKK, an insurgent group in Turkey that seeks legitimacy by fighting ISIS.

Turkey has fought PKK militants for 30 years which has resulted in the deaths of 40,000 victims, said Çiçek. "Some media organizations try to show it as a humanitarian aid group just for it fights ISIS militants."

PKK is designated as a terror group by Turkey, EU and the U.S.

"The international community needs to condemn all terror groups without making any exception including PKK or ISIS," he said.