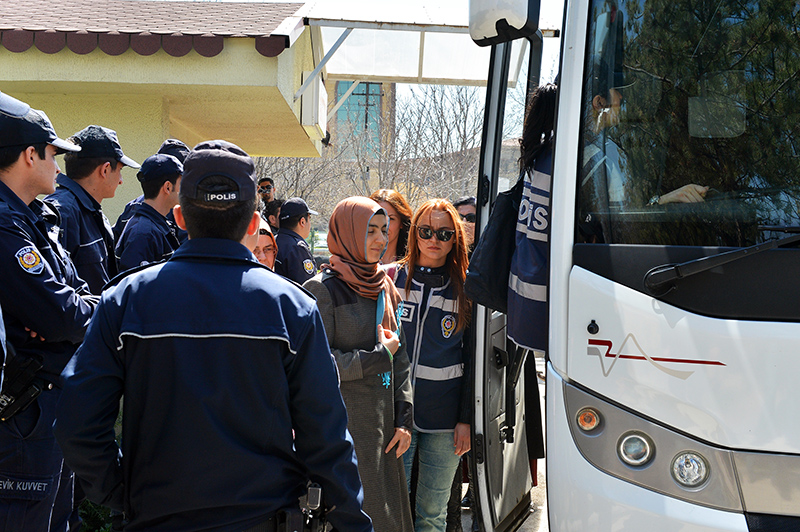 | Photo: AA
by Daily Sabah with AA Mar 27, 2015 12:00 am
An Ankara court on Friday ordered the arrest of 32 out of 62 Gülen Movement-linked suspects who were detained as part of a probe that investigated the cheating scandal that allegedly took place in the 2010 Public Personnel Selection Exam (KPSS).

The remaining 30 suspects were released, but the court said their fraud cases would remain under judicial review. The suspects have been accused of being members of a criminal organization, forging official documents, committing fraud, destroying evidence and abusing power.
It was reported on Tuesday that the U.S.-based, controversial imam, Fethullah Gülen, is the primary suspect in a prosecutor's indictment into cheating allegations on the KPSS in 2010. He is also mentioned as the prime suspect in the illegal wiretapping activities by alleged members of the movement.

On Monday, the Ankara Chief Prosecutor's Office ordered the detention of 82 people for allegedly being involved in cheating on the annual KPSS exam. Police detained the suspects after raiding predetermined addresses in 19 cities including Ankara, Istanbul, İzmir, Eskişehir, Sakarya, Isparta, Sivas, Samsun and Bursa. On Tuesday, the office said a total of 616 suspects involved in the alleged fraud case were all current civil service employees on active duty. On Thursday, the office said that seven out of the 75 people detained in the case had been released.

The suspects were taken into custody in an operation launched in 19 provinces, including Ankara, Istanbul, İzmir, Eskişehir, Sakarya, Isparta, Sivas, Samsun and Bursa. The suspects, who are allegedly affiliated with the Gülen Movement, were sent to court on Thursday as part of the investigation into the cheating allegations of members of the Gülen Movement during the 2010 KPSS.

Baki Saçı, who is among the suspects in the KPSS case, had reportedly confessed that senior movement member, Berat Koşucu, who fled the country two months ago, had sent him the questions for the 2010 KPSS a day before the exam. In his testimony, Saçı reportedly said that Koşucu had called him to tell him to check his email. "I have a gift for you," he reportedly told Saçı, who had no access to the Internet in his village. The suspect added that he called a friend, Mustafa Süleyman İnanç, who works as a jeweler in the town, and asked him to access his inbox so that he could have a copy of the questions as well. İnanç, who was also detained in the KPSS operation, had reportedly given the same statement in his testimony.

The movement operates hundreds of schools in more than 140 countries around the world. Gülen schools in the U.S. have faced investigations for hiring more immigrant workers than Google and failing to properly use public funding in 2009. Gülen schools have been accused of mostly hiring Turkish teachers and paying them more than their American counterparts. A charter school of the movement was shut down in 2011 on charges of bribery. The Gülen Movement has over 140 private schools and charitable organizations around the world, including in the U.S., Europe, Asia and Africa. Some countries hosting Gülen schools have begun to question their mission, with some calling its "shadowy structure" problematic. President Recep Tayyip Erdoğan has emphasized in no uncertain terms that the schools affiliated with the movement should be shut down, citing their alleged illegal activities, and has vowed to replace them with new schools supported by the National Education Ministry.