‘Turkey is a leader in humanitarian response' 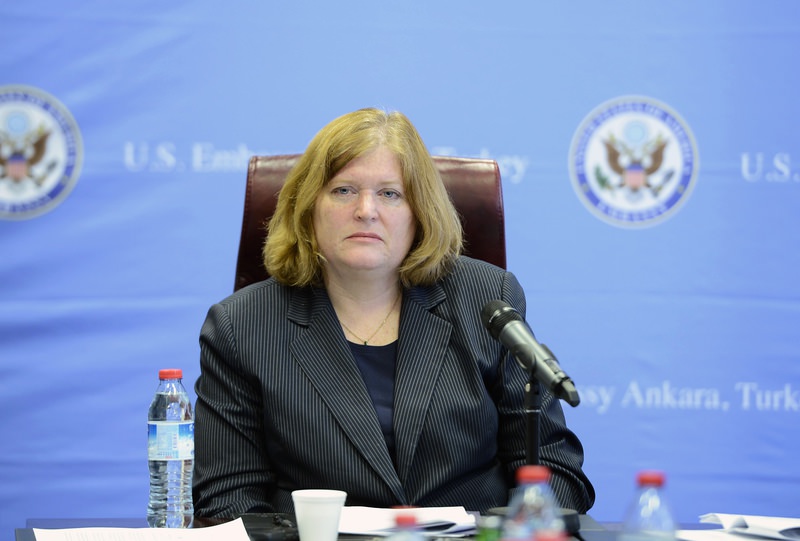 by Merve Aydoğan Apr 06, 2015 12:00 am
Following the third International Humanitarian Pledging Conference for Syria in Kuwait City, U.S. Department of State Assistant Secretary for Bureau of State for Population, Refugees and Migration Anne C. Richard met with a group of Turkish media members on Friday to discuss the situation with regards to Syrian refugees residing in Turkey, as well as to evaluate her meetings with a number of Turkish government officials. Commenting on Turkey's role throughout the ongoing Syrian crisis and Turkey's response to the flow of refugees, Richard said that Turkey is a leader in the humanitarian response to the Syrian crisis. Richard emphasized Turkey's response to the refugee crisis and underlined the importance of Turkey keeping its borders open to refugees.

During her visit to Turkey, Richard met with representatives of international and nongovernmental organizations as well as government officials, regarding the Syrian refugee issue. She stated that there have been a number of positive developments in Turkey in terms of dealing with refugees since last year. In her meeting with media members on Friday, Richard said that Turkey continues to be a world leader in the humanitarian response to the Syrian crisis and that they asked the government to continue to keep its borders open.

"Turkey is in the forefront of nations in terms of accepting refugees and providing very appropriate ways to help them," said Richard. She added, "The U.S. has funded $259 million in humanitarian assistance that has been spent in Turkey since the beginning of the conflict four years ago and that it is a piece of a $3.7 billion aid package that we have provided in the region."

Commenting on the partnership between the U.S. and Turkey in terms of Syrian refugees, Richard said that the two countries must continue to work to together to re-settle refugees and added that they have seen an enhanced process and a smoother way of collaboration and connection between the two countries and also with organizations such as the United Nations High Commissioner for Refugees (UNHCR). In regards to the U.S. accepting refugees, Richard said: "664 refugees from Syria are coming to the U.S., and we have taken more than 5,000. The U.S. took 5,624 refugees out of Turkey last year. So a small number of those are Syrians, but includes significant numbers of Iraqis, Iranians and Afghans." She affirmed that the U.S. expects to take more Syrians in the days to come, as they are receiving referrals from the UNHCR. As reviews for the cases generally takes 18-24 months, Richard said the U.S. has to carry out background checks, security interviews to make sure that they qualify under U.S. refugee law.

While a great number of Syrian children residing in Turkey have already been receiving an education, Richard met with Turkish Minister of Education Nabi Avcı on Friday and said that it was very generous on the part of the Turkish government and reaffirmed that there is still much work that needs to be done in providing more education opportunities to the children in Turkey. She also stated that education had topped her agenda throughout her meetings in Turkey in regards to the situation of Syrian refugees. Continuing her statements about the cooperation among Disaster and Emergency Management Authority, Turkish Red Crescent, with other UN organizations and the U.S.' indirect contributions to the organizations, Richard said the U.S. funding has helped nearly 20 UNICEF schools to teach Syrian children in the southern Turkey, which includes cities such as Gaziantep, Şanlıurfa, Batman and Mersin.

Finishing her statements by praising Turkey's accomplishments and expressing gratefulness towards Turkey's generosity in response to the Syrian crisis, the U.S. official said, "The Assad regime bares most of the responsibility in regards to the Syrian crisis and what we are facing today is due to the response that the Assad regime made to peaceful protests four years ago in Syria."