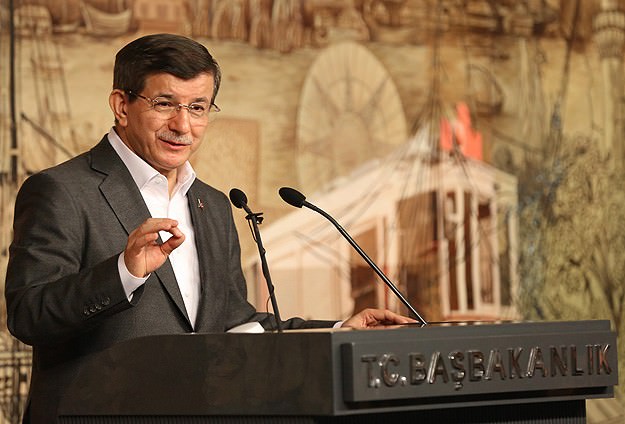 | AA Photo
by Merve Aydoğan Apr 19, 2015 12:00 am
Prime Minister Ahmet Davutoğlu met with representatives from the nongovernmental organizations of Roma communities on Sunday at Dolmabahçe Palace in Istanbul, where he called on Romanis who face problems in EU countries to come to Turkey. During the gathering at Dolmabahçe Palace, nearly 90 representatives, including many well-known Romani singers, came to discuss the issues that the Roma community faces in Turkey. While European Union countries fail to deal with Roma communities living in Europe, the EU Fundamental Rights Agency said one-third of Romanis are unemployed, 20 percent have no health insurance and 80 percent live below the poverty line.

On the other hand, in efforts to maintain Turkey's democratization process, the ruling Justice and Development Party (AK Party) is continuing its reforms in the Roma communities.

While the AK Party has introduced and implemented reforms in the Kurdish and Alevi communities, the AK Party deputies have also devoted efforts to continue reforms to enhance living conditions and resolving the issues of the Roma communities in Turkey. The AK Party deputy for İzmir, İlknur Denizli, in a city known for having a prominent number of Roma citizens, described the Romanid in Turkey as part of a "cultural brotherhood." The İzmir deputy met with the Roma communities in late February where she stated that "the AK Party is continuing its works to resolve the issues of the Romanis." During the meetings in İzmir, Denizli said a comprehensive analysis of the issues and brainstorming of possible resolutions were addressed. During the breakfast on Sunday, the chairman of the AK Party and Prime Minister Davutoğlu addressed and discussed the issues voiced by Romani representatives.

The EU in 2011 urged its members to adopt plans to help Romani citizens find jobs, with healthcare, education and housing, but the plans were ignored. However, Turkey's Family and Social Policies Ministry has set aside a generous budget of TL 31.3 million ($12 million) for social support projects geared toward Turkey's Romani population for 2014-2016. Furthermore, the far-right political parties of Europe have sent warnings about Roma communities, claiming to be a threat to society and labeling them "lazy parasites." The government, on the other hand, has declared a reform plan in which it will provide vocational training for 5,000 Romanis initially to help their chances of employment. Municipalities will provide incentives for Romani craftsmen to open shops. Additionally, the AK Party government will also provide education opportunities for Romani children attending grade and high schools to boost their achievements through special training courses. Free courses for preparation to university entrance exams will be offered to disadvantaged Romani students.

Although, the European Commission on April 7, called on EU member countries to end discrimination against the Roma community, Romanis continue to remain a marginalized group in various countries throughout the world. While they have faced and continue to face discrimination, persecution and alienation for their unique lifestyle and cultural practices, Turkey's reforms and action plans aim to enhance their livelihood.

In 2010, during Nicolas Sarkozy presidential term, the French government launched a repatriation program to send thousands of Romani back to their home country due to the presence of illegal camps in the country. Although Romani people are EU citizens, French law requires them to get a work and residency permit to allow them to stay more than 3 months. Expulsions of Romani people have not ceased since François Hollande was elected president in 2012.

In 2013 alone, 165 camps were dismantled and 19,380 were sent away - a little more than the two previous years combined - wrote French daily Le Monde in January 2014, citing a report by the European Romani Rights Center.