Evolution in relations between Turkey and Kurds discussed in Rome 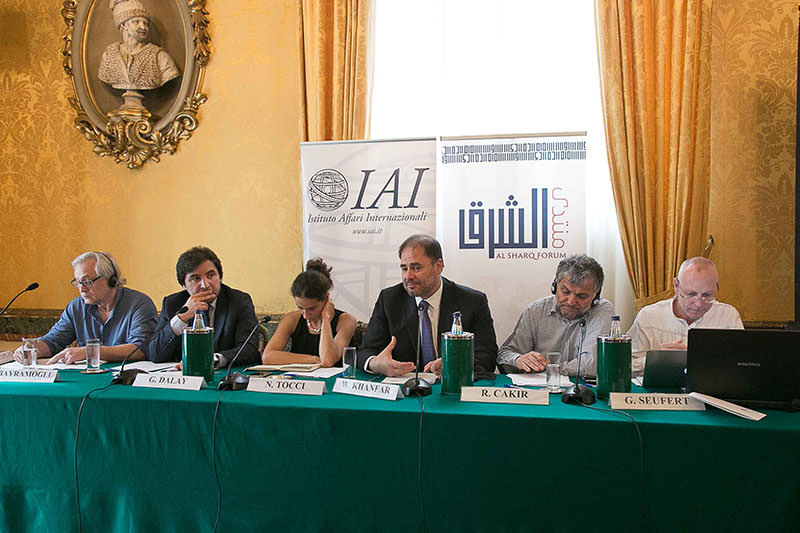 by Ali Ünal May 17, 2015 12:00 am
Turkey's reconciliation process and the regional dimensions of the Kurdish issue were discussed in Rome in a panel co-organized by the Sharq Forum and Istituto Affari Internazionali (IAI) on Friday.

The panel, called "Turkey, Kurds and a New Region," consisted of three different sessions, and experts and academics from various countries, mostly from Turkey, provided different angles on the Kurdish issue, which was held at the Palazzo Rondinini. Speaking about the panel, Sharq Forum President Wadah Khanfar said a new spirit of integration could be built with reference to Kurds. Khanfar added, "Although the region is in turmoil, it is also in a process of transformation," adding: "While we specifically refer to the region, what we really discuss is the world. Such as the war in Syria sending refugees to Sicily."

IAI President Ferdinando Nelli Feroci also made notable remarks where he drew attention to "the regional vacuum" that he described as "a mix between deeper interconnection and fragmentation in the region and elsewhere, which has implications for the Kurdish issue." He further underlined three major factors: "(1) A transformation within Turkey that goes well beyond the Kurdish question. (2) A transformation within Turkey's Kurdish movement. More recent regional transformation involving all neighboring states directly affects the Kurdish issue. (3) International level: a) an increasingly interconnected world; b) international arena in a process of transformation."

The panel continued with three sessions, titled "Turkey's Kurdish Peace Process: Past, Present and Future Prospects," "Turkey and the Kurds: An evolving relationship in search of an anchor in a crisis-ridden region" and the last session, "Turkey in its drastically altered neighborhood." In the first session Turkish columnist Ruşen Çakır discussed Kurdish Islamists and whether they are "new players in Kurdish politics and the peace process." Çakır underlined that "over the past five years, [there has been] a major split between Kurdish and non-Kurdish Islamist movements." Additionally, German Institute of International and Security Affairs (SWP) President Dr. Günter Seufert commented on the role of the EU in the reconciliation process and said: "The Kurdish political movement seeks cooperation with Europe and the United States while pursuing a coherent agenda in Turkey, Iraq and Syria. As such, the Kurds represent a source of hope in the Middle East."

In the second session, Joost Hiltermann, the program director for the MENA region for the International Crisis Group, talked about Turkey and the Kurdistan Regional Government [KRG] being "strategic partners in the post-ISIS [Islamic State of Iraq and al-Sham] period." Hiltermann said, "In the future, Turkey should push the KRG to unify its various party-based peshmerga militias into a Kurdish force while working more closely with Baghdad." In addition to Hiltermann's statements, a former deputy from the ruling Justice and Development Party (AK Party), Abdurrahman Kurt, said: "Bashar Assad vacated Syrian Kurdistan to use the PYD [Democratic Union Party] against Ankara. Meanwhile, the area became part and parcel of the Kurdish reconciliation process – which the government attempted to resist until the Kobani protests." Kurt further underlined that developments in the reconciliation process reflect the Turkish government's efforts. Discussing Kurdish politics, Denise Natali, an American specialist on Kurdistan from National Defense University in Washington, said that efforts to defeat the ISIS militants provided legitimacy to the PKK/PYD group. Natali continued by saying that the Kurdistan region is becoming more decentralized as the region becomes decentralized.

The last session from the panel included a discussion of Turkey's geographical position in an altering neighborhood with the participation of Foundation for Political, Economic and Social Research (SETA) President Burhanettin Duran, Center for Middle Eastern Strategic Studies (ORSAM) Director Şaban Kardaş and Al Jazeera Türk News Director Gürkan Zengin. Duran began the session by discussing the foundation of Turkey's neighborhood policy in the framework of rationality, challenges and prospects. Kardaş further commented on the appointment of Heidar al-Abadi as prime minister and discussed whether it would be a game-changer in Turkish-Iraqi relations. Zengin, as the last panelist, discussed Turkish-Iranian relations.

Touching on the mission of the Sharq Forum, Khanfar said the most important mission of their think tank is to generate solutions for economic and political security related to the region, an area they call "al-sharq," which consists of North Africa and the Middle East. In addition, research director Galip Dalay described the Sharq Forum as a newly established institution with a physical presence in Istanbul that tries to adopt a holistic approach to the region, rather than any particular approach.