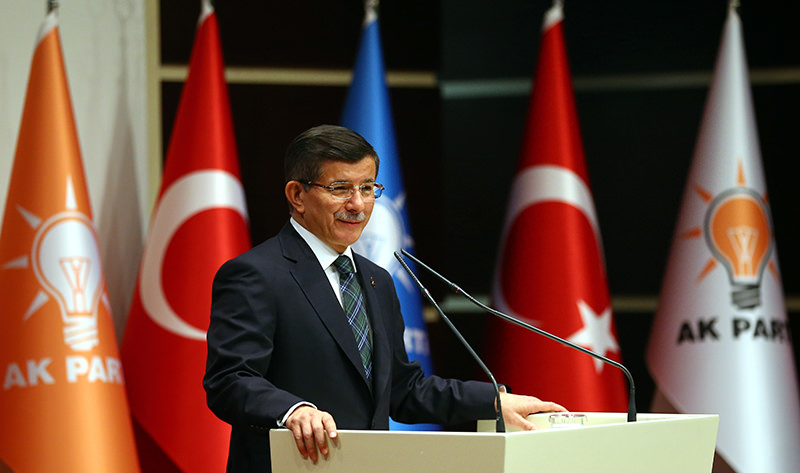 | AA Photo
by Daily Sabah with AA Jun 16, 2015 12:00 am
Turkish Prime Minister Ahmet Davutoğlu said on Tuesday that the AK Party is ready to form a coalition and that they will do whatever they can to ensure that stability persists in Turkey.

Davutoğlu spoke at his party's first group meeting following the general elections and highlighted that they are ready to reconcile and called parties to adopt a similar attitude: "Those who want to establish a coalition with the AK Party should first open their fists and bury their weapons" he said, adding that it will not be possible to shake hands when one's fists are clenched.

The Turkish prime minister also criticized the life sentence pronounced against Egypt's former president Mohamed Morsi as a test for both the Western countries and the international media in their stance for democratic principles.

"We'll see what the international media will do against what has recently been happening in Egypt after they accused the Turkish president and its government of becoming 'dictatorial and authoritarian' in their broadcasts during transparent Turkish elections," he said.

"I wonder if they can raise their voice [against Egypt sentences]," he added.

Davutoğlu's speech ended before it was reported that Morsi's death sentence over separate jailbreak charges had been upheld by an Egyptian court.

Davutoğlu emphasized that it would soon become evident whether the international media's actual cause is democracy or their own interests, judging from their reaction to the life in prison sentence "against one of the leading names of a political movement that has never resorted to violence".

"We will see those who talk about freedoms in Turkey but salute Egypt's coup regime, those who speak of justice but remain silent against the oppression in Syria," he added.

In April, Morsi and 12 co-defendants were sentenced to 20 years in prison each on charges of mobilizing supporters to "intimidate, detain and torture" dozens of anti-Morsi protesters during clashes outside eastern Cairo's Ittihadiya presidential palace in December 2012.

Morsi was ousted in a 2013 coup led by the then military chief Abdel Fattah el-Sisi following protests against his one-year rule.

Since Morsi's ouster, Egyptian authorities have launched a relentless crackdown on dissent that has largely targeted Morsi supporters, leaving hundreds dead and thousands behind bars.