Syrians frustrated with US condition to not prioritize Assad in fight 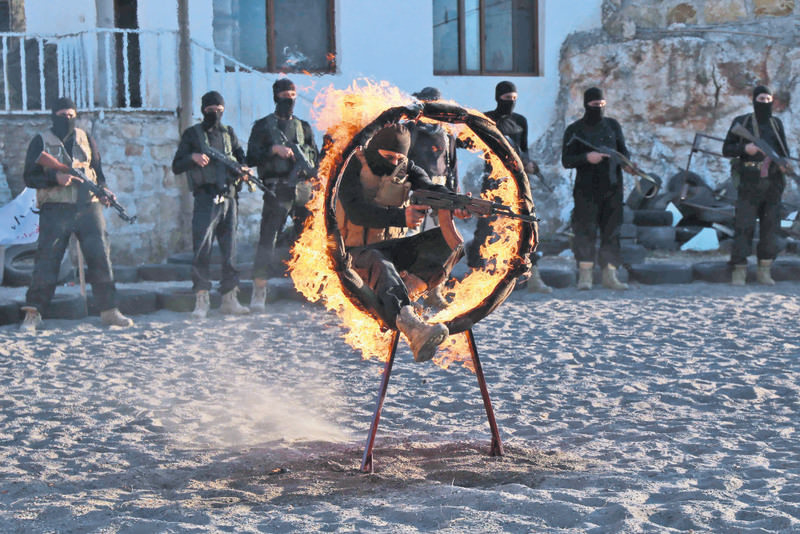 by daily sabah
Jun 29, 2015 12:00 am
Fewer than 100 Syrian opposition fighters are currently being trained by the U.S. military to fight the Islamic State of Iraq and al-Sham (ISIS), a small amount for a sputtering program with a stated goal of producing 5,400 fighters a year. The training effort is moving so slowly that some critics question whether it can produce enough capable fighters quickly enough to make a difference. U.S. Military officials said last week that they still hope for 3,000 by year's end. Privately, some have acknowledged the trend is moving in the wrong direction.

The train-and-equip program for moderate Syrian opposition forces has already begun in Turkey and Jordan, whereas logical preparations are currently underway for it to start in Saudi Arabia and Qatar. Turkey, however, has been continuously saying that a more comprehensive strategy in addition to training of the opposition groups is need to find a permanent solution to the Syrian civil war. Accordingly, it has been suggesting that safe and no-fly zones be established in northern Syria.

Many Syrian volunteers prefer to use their training to fight both ISIS and Syrian President Bashar Assad's forces, which was the original target of their revolution. Abdul-Jabbar Abu Thabet, commander of the Aleppo Swords Battalion, a moderate faction that is fighting both Assad forces and ISIS, said he believes the Americans are more interested in recruiting Syrian army defectors than moderate rebels.

He said he would no longer give Americans the names of training candidates from his group, after having done so once and not receiving a U.S. response. "The Americans are saying they want to train rebels to fight against ISIS only," he said by telephone from northern Syria. "The fighting should be against ISIS, the [Assad] regime and everyone who is against the revolution."

On June 26, 2014, the White House said it was asking Congress for $500 million for a three-year train-and-equip program, which began in May. The main problem thus far has been finding enough Syrian recruits untainted by extremist affiliations or disqualified by physical or other flaws. Of approximately 6,000 volunteers, about 1,500 have passed muster and await movement to training camps in other countries. Citing security concerns, the Pentagon will not say exactly how many are in training. Officials said that as of Friday, the number was under 100 and that none have completed the program. "We have set the bar very high on vetting," said Col. Steve Warren, a Pentagon spokesman.

Maj. Gen. Michael Nagata, the Central Command special operations commander who is heading the program, wants volunteers with more than a will to fight. "We are trying to recruit and identify people who ... can be counted on ... to fight, to have the right mindset and ideology," and at the same time be willing to make combating [ISIS] their first priority, Defense Secretary Ashton Carter told the House Armed Services Committee on June 17. "It turns out to be very hard to identify people who meet both of those criteria," Carter said.

The Pentagon announced in May that it had begun training 90 recruits in Jordan, but it has refused to give details. Defense officials said last week that training is also underway in Turkey. Eventually it is to be expanded to bases in Saudi Arabia and Qatar.

U.S. officials have pointed to Syrian Kurds' successes in the north as an example of what U.S. airpower can enable when coupled with a credible, reliable ground force. But it does not answer the question posed by Illinois Representative Tammy Duckworth to Dempsey. When she asked him whether the rebel-training program is worth continuing, he offered something less than a ringing endorsement. "It's a little too soon to give up on it," Dempsey said.

The train-and-equip program for moderate Syrian opposition forces is, however, proceeding according to plan in Turkey's Kırşehir province, and the U.K. has extended its support to join in training opposition fighters together with Turkey and the U.S., Foreign Minister Mevlüt Çavuşoğlu recently said. Commenting on the recent developments of the train-and-equip program, he said: "The program has begun in Turkey and Jordan. It will also begin in Saudi Arabia and Qatar where logistical preparations are currently underway." Underlining that the training is being held only in Kırşehir, Çavuşoğlu further indicated that the number of selected participants has reached several hundred. Çavuşoğlu also said the U.K. has asked to support the program. "In principle, we are open to British support, but we [Turkey and the U.K.] have not decided on the area in which it would give support." He reiterated that the program for Syrian opposition forces is not enough on its own. "All kinds of alternatives are possible, including a military operation," he added. In response to a question of whether protection will be provided to the newly trained forces with airstrikes and whether Turkey or the U.S. would carry out such airstrikes, he said Turkey has wanted to establish a safe zone from the very beginning.
Last Update: Jun 29, 2015 8:35 pm