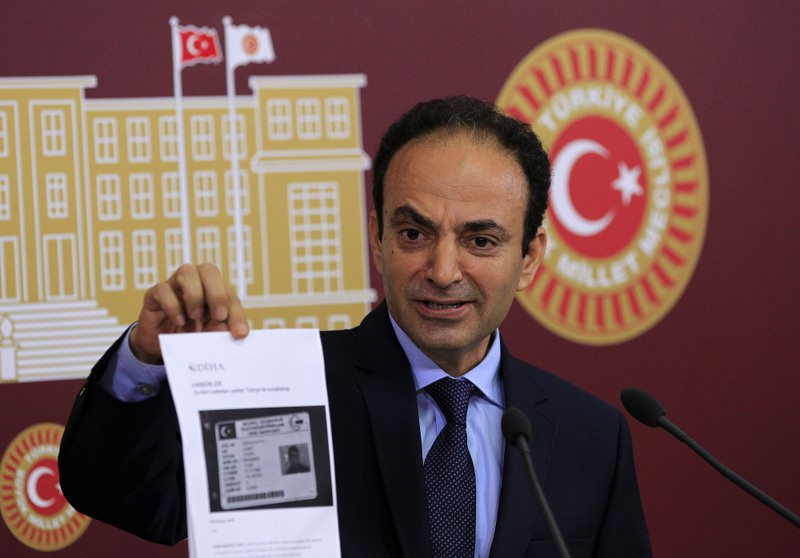 by Fatih Şemsettin Işık Jul 07, 2015 12:00 am
The person who was claimed to be an Islamic State of Iraq and al-Sham (ISIS) militant and killed in a terrorist attack in Kobani, according to the Peoples' Democratic Party (HDP) Şanlıurfa Deputy Osman Baydemir, is actually reportedly alive and has never been in the town.

Ahmad Al Hasan, whose name was broadcast by Baydemir during a TV show last week, actually took refuge in Turkey after fleeing from the Democratic Union Party (PYD). He said that his family has been captured by the PYD and they will be killed unless he returns.

In the program, Baydemir showed an ID from Turkey's disaster agency AFAD and claimed that the ID belongs to a militant killed in the attacks that took place in Kobani, along with accusing Turkey of supporting ISIS.

"I am here, I am not dead and still alive. I have never been to Kobani. I don't know what kind of place Kobani is," Hasan said. He indicated that ISIS confiscated his ID during the organization's raid on his home. "I have been sought by ISIS long before. When ISIS raided our home, they took my ID," he remarked.

Additionally, AFAD issued a statement the following day in which the allegations by Baydemir were denied. The statement said, "The aforementioned person lived in a tent city in Akçakale between 18.09.2012 and 16.08.2013. This person has been defined as a provocateur by the camp administration due to his dubious stance and attitudes and the related information has been transmitted to police units. The person left the camp voluntarily, went abroad through illegal means and has not been in our country since 2013."

The smear campaign led by some media outlets and political components after the latest ISIS attack on Kobani, which led to further accusations of Turkey's link with the terrorist organization, still continues.

Previously, a residence permit found on a dead ISIS militant's body after the attack was cited in printed and social media as an alleged link between Turkey and ISIS. However, reportedly, it was revealed that the document was stolen, fake and expired. In addition to that, it was unveiled that Ahmed al-Hassan, whose name is printed on the document, is actually a former Free Syrian Army member who fled to Turkey from his hometown Tal Abyad after ISIS attacks in 2013.

Along with some international media outlets such as Reuters and the BBC, some Turkish media outlets, including the Yurt daily and Iran-linked Ehlibeyt Haber, reported the same accusation last week and claimed that ISIS militants had entered Kobani through Turkey's Mürşitpınar border crossing in the Suruç district of the southeastern province of Şanlıurfa. The claims were strongly denied later throughout the day by Turkish officials. Video footage refuting the allegations was later provided by Anadolu Agency. Later, People's Protection Units (YPG) spokesman Redur Xelili also confirmed that ISIS terrorists entered Kobani from Jarablous, not Turkey.

Turkey has been doing its part to identify and deliver potential foreign fighters seeking to cross the border to Syria to join ISIS, despite little cooperation in intelligence sharing by Western countries. Being one of the first countries to list ISIS as a terrorist organization, Turkey has deported over 1,400 people thought to be foreigners seeking to join ISIS by passing through Turkey so far and banned the entrance of over 13,000 people into the country.
Last Update: Jul 07, 2015 8:27 pm
RELATED TOPICS