Troop buildup on Syrian border to accelerate after Ramadan 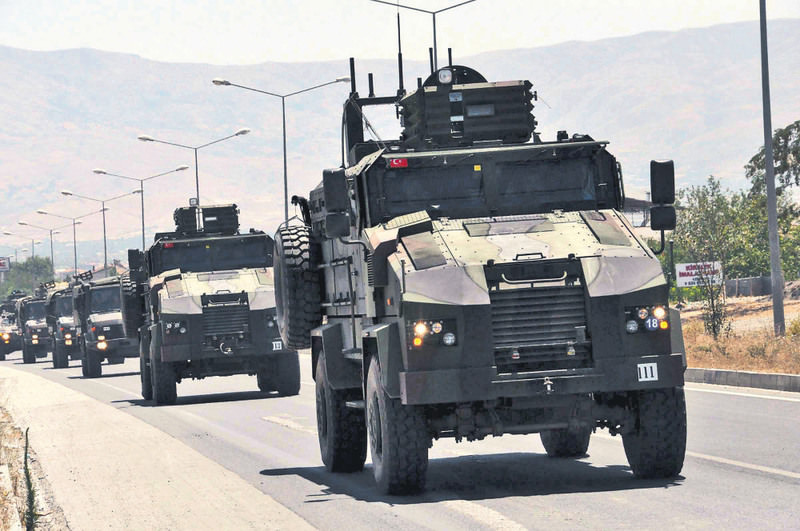 by Fatih Şemsettin Işık Jul 08, 2015 12:00 am
Following the troops and military equipment sent from Tunceli and Gaziantep to the Syrian border and high-ranking military officials' visits coming one after another to inspect the state of affairs there, it has been reported that the Kayseri 1st Commando Brigade Command is also preparing to send some troops to the border after Ramadan. Reportedly, preparations started in the Kayseri 1st Commando Brigade and combat readiness training has doubled with wing shooting practices being intensified. It is also known that even noncombat soldiers were informed that they will be sent to the border.

Along with the brigade from Kayseri, around 500 soldiers from the 4th Commando Brigade in Tunceli were also deployed on Friday, July 3 to the Syrian border. It has been indicated that the stationed troops were professionally equipped for battle under all war conditions as well as being trained to a top level to fight against terrorists. For this reason, it is reported that the troops were deployed to the region where the first response could be made in the event of an armed conflict on the Syrian border.

Meanwhile, many tanks and troop carriers that were sent from the Gaziantep 5th Armored Brigade Command came to border posts in Kilis province on Tuesday. On the same day, Commander of the Armored Brigade, Brig. Gen. Cemalettin Doğan, inspected the region where tanks, missile batteries and air defense systems were deployed during his visit to border posts in Kilis. The region also has advanced troop carriers, tactical wheeled armored vehicles, tanks and air defense systems.

He also met several soldiers affiliated with Special Forces in the region. Aksakallı was also informed about recent developments in Syria.
The Syrian side of the border has been quiet for a while as security officials on the border tightened the identification checking processes.
Last Update: Jul 08, 2015 8:19 pm
RELATED TOPICS