While MHP is willing to make sacrifices, it still rules out being coalition partner 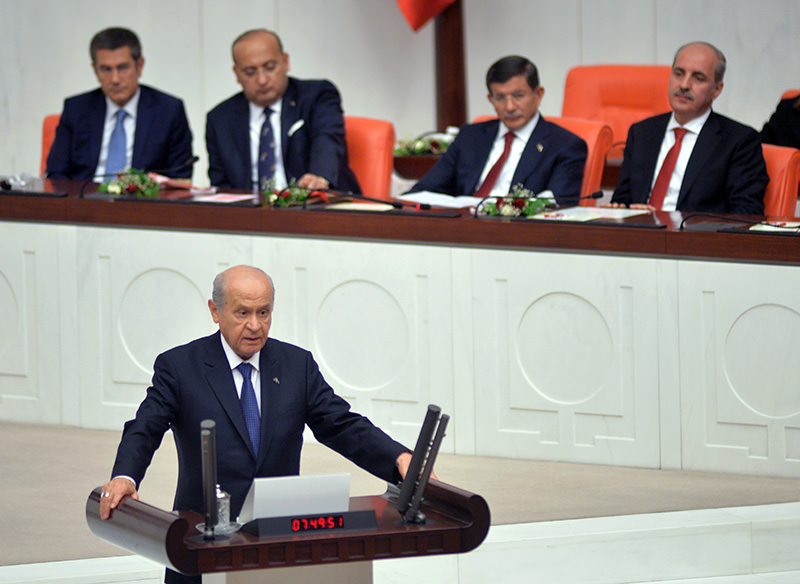 | AP Photo
by Daily Sabah Jul 09, 2015 12:00 am
As President Recep Tayyip Erdoğan set the clock ticking on a 45-day period by giving the mandate to form the government to Prime Minister Ahmet Davutoğlu on Thursday, Nationalist Movement Party (MHP) leader Devlet Bahçeli, who has been clinging tightly to his principles for an alliance, issued a statement on Thursday saying "The MHP will make sacrifices" in order to dispel dissension. The statement, which at first gave the impression that Bahçeli had finally decided to be part of a coalition, later proved to be contradictory, as he then went on to say that "the MHP's role is to be a dignified main opposition," thus returning to his previous stance.

June elections have pitched Turkey into a hung parliament ending the period of single-party government that lasted for more than a decade. Since the unofficial discussions began, the MHP, which increased its votes by 3 percent compared to the 2011 elections due mainly to a reaction against the rise of the pro-Kurdish Peoples' Democratic Party (HDP), has been saying they prefer to be the main opposition to a coalition government formed between the AK Party-HDP or AK Party-CHP. He ruled out the option of an opposition bloc proposed by CHP leader Kemal Kılıçdaroğlu between the CHP, MHP, and HDP, citing that his party would never be part of a plan that involves the HDP. Bahçeli also put forth three stipulations that consist of: nixing the reconciliation process that was launched to end the Kurdish question; President Recep Tayyip Erdoğan's remaining within constitutional boundaries, and; digging up corruption claims against four former ministers.

"The MHP will make sacrifices to avert instability," Bahçeli said, in what initially looked like a green light to a coalition, either with the opposition or with the AK Party. The statement, however, went on to reveal that the MHP is still not considering the option of a coalition with any party, but rather is determined to be the opposition. Bahçeli purportedly wants to avoid any possible accusation of pushing the coalition talks into a deadlock in case of a re-run.

Bahçeli said that the party's possible sacrifice depends on whether its preconditions are met.

MHP's four preconditions are as follows:

1. The outlawed PKK organization should immediately lay down arms and the pro-Kurdish Peoples' Democratic Party (HDP) should put a distance between itself and the outlawed organization in order to eliminate doubts and concerns regarding the party's legitimacy.

2. Democratic gains acquired during the AK Party's administration must continue.

3. Ethnic and religious drifts and polarization should be ended; brotherhood ties should be restored.

4. Struggle against bribery and corruption should proceed.