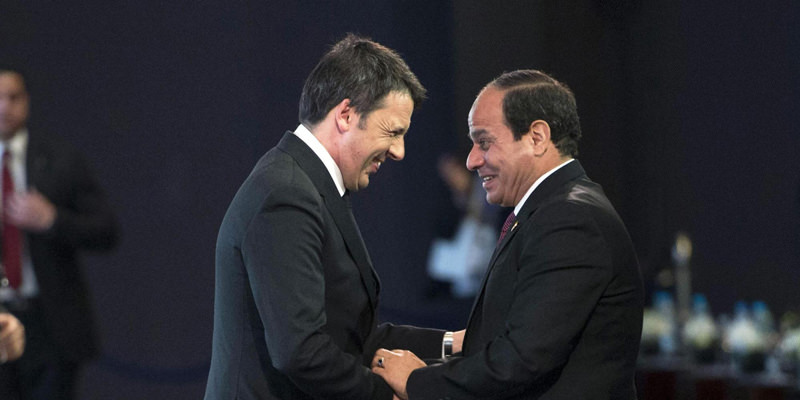 by Daily Sabah Jul 12, 2015 12:00 am
"I think al-Sisi is a great leader," Italian Prime Minister Matteo Renzi said about the former military commander and current President of Egypt Abdel Fattah El-Sissi, who is widely seen as the architect of the 2013 bloody coup against President Mohammed Morsi, Egypt's first freely elected president in an interview with Al-Jazeera television broadcast Sunday.

The Italian PM hailed a president whose ways have proven to be anti-democratic. Sissi is behind the death sentence of more than 106 people including the democratically elected ex-President Mohammed Morsi.

Those that understood the essence of democracy protested in anger in Rab'aa Square in Cairo for six weeks. The sit-in in Rab'aa was then dispelled on Aug. 14 last year by the military.

According to the Human Rights Watch, this was the most serious incident of unlawful mass killings in modern Egyptian history and a minimum of 817 people, more likely at least 1,000 were killed in Rabaa Square on August 14.

Anyone seen to support the symbol of Rab'aa was detained, and anyone who spoke against the coup was seen as a threat to Egypt.

"I think al-Sisi is a great leader," Renzi said in an interview with Al-Jazeera television broadcast Sunday.

"Let me be very frank. In this moment Egypt will be saved only with the leadership of al-Sisi," Renzi said in English.