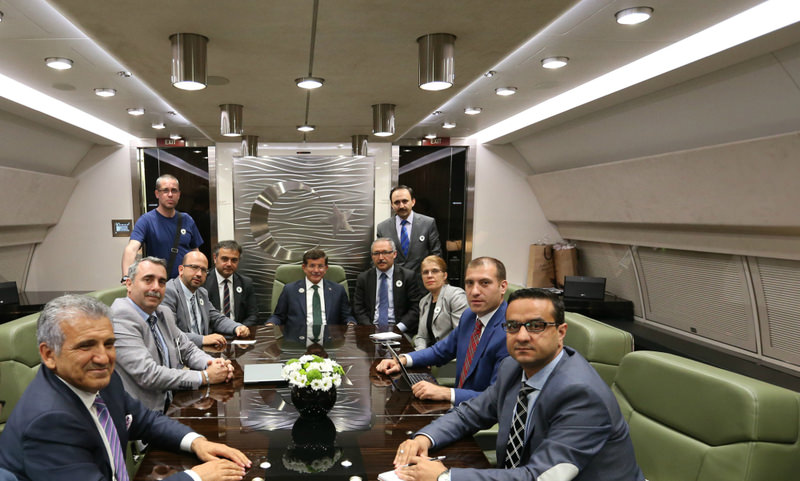 PM Davutoğlu, who refrained from coming up with rigid principles to be able to team up with a party, will begin his tour amid dim hopes that a partnership will be formed. The opposition parties, revealing their stipulations before the negotiations begin, will likely make a compromise tough during the talks

After receiving the highest number of votes in the June 7 elections, Justice and Development Party (AK Party) leader Ahmet Davutoğlu was tasked with the formation of a government by President Recep Tayyip Erdoğan on Friday. Today, Davutoğlu will begin his tour of coalition talks starting with Republican People's Party (CHP) leader Kemal Kılıçdaroğlu. Davutoğlu, who is going to be holding coalition talks with every opposition party until Thursday, said that the AK Party possesses the will to form the government, while he was uncertain about the opposition's will.

Responding to questions from journalists on the prime ministerial plane returning from Bosnia-Herzegovina where he attended the commemoration of the Srebrenica massacre and met with officials, Davutoğlu said that the most important part of coalition talks is to have mutual trust.

When reminded of Kılıçdaroğlu's assertion that a coalition of the AK Party and the Nationalist Movement Party (MHP) was probable, and he would not be a part of the cabinet, even if there is a settlement between the AK Party and the CHP, Davutoğlu said that stating what should be discussed during coalition talks to the media was not a constructive attitude. Following the June 7 general elections, Davutoğlu said the opposition parties made contradictory statements to the media; thus, in the first round of talks they will try to understand and evaluate the real stance of the parties. Underlining that the AK Party has "a strong will towards forming the government," Davutoğlu said that he is unsure whether the opposition parties have the same will.

"We have the will with regard to forming the government. I am unsure of the other parties' will. I am aiming to understand their will at first, whether they really do have the will to form the government. Because there have been many different statements made, we need to have a clear view. I need to be sure of the will of the opposition. With the amount of willingness the parties show, we can take the second step; this does not mean a second round of talks, and the second step can be taken in the first round of talks. The psychological barriers must be lifted. Nearly 60 to 70 percent of negotiations are regarding psychological factors. The other 20 to 30 percent is only technical details. Once the psychological factors are overcome, the psychological factor will become the will. All in all, it is a matter of the will. One must feel the will; then, the psychological barriers will be lifted, if there are any," said Davutoğlu.

Davutoğlu also said that as the reality changes on a daily basis, the contradictions become more apparent. "The MHP leader, on the night of the elections, said that they would not be a part of the coalition; however, two days later he expressed a different view on the coalition, showing indecisiveness. Similarly, CHP leader Kılıçdaroğlu's "bloc" and "alternating prime ministry" concepts, along with his contradictory statements are something that should not be done if you want to get results. If your statements are publicly binding, you are limiting your own space. There is no point in making these statements. If you are unwilling, you should declare it during the talks."

Signifying that a party that is willing to form a coalition would not make any binding statements, Davutoğlu said that the formation of a government requires a crucial sense of responsibility and that those who do not put all their heart into the matter will "definitely lose."

"A serious partnership requires cooperation. However, whoever does not put all his heart into this matter will definitely lose. It is a matter of principles. I am determined to the very end when I take action. If you are not going to conclude what you have started, it is not worth it," Davutoğlu said.

Indicating that overcoming prejudices and psychological barriers are the most challenging part of coalition talks, Davutoğlu said that after these barriers are surmounted, technical details will be not be challenging.

"Overcoming prejudices regarding psychological barriers may become hard to overcome; however, if it is about the technical details, we can always establish commissions and move on to the next stage. If there is a possibility to surmount the psychological barriers, it means that the first stage is complete. Talks may take a long time to settle, but everything should be discussed during the talks. The foundation must be concrete. To be honest, I find it more important to clear all the suspicions than detailed terms of a coalition. Mutual trust is important.

Davutoğlu underlined that claims concerning the AK Party aiming to form a government prior to the upcoming congress in September with efforts to strengthen itself do not reflect the truth. He continued by adding: "I do not have a concern about the congress. We must put the party's interests before our own. Though the congress is the party's interest, I would never think of the congress when this country is urgently in need of a government. Such claims of me needing to go to the congress as the prime minister do not reflect the truth, and those who know me would disregard the claims."

Responding to further claims that President Erdoğan wants a snap election, Davutoğlu said that that those who indicate such claims only aim to create the image of disagreement between the prime minister and the president and that the allegations further aim to display that both of them have different aims. Davutoğlu added, "We may have differences of opinion or views; however, these differences will never surpass the country's interest."

PM Davutoğlu: We are cooperating with the U.S. to find solutions to save Syrian people Remarking on the visit paid by the committee led by U.S. Special Presidential Envoy for the Global Coalition to Counter ISIS John Allen, Prime Minister Davutoğlu said that they are always in touch with U.S. military and diplomatic committees and that they are cooperating to find solutions to save the Syrian people from the Bashar Assad regime and the country's internal conflicts. "We are of the opinion that the moderate opposition should increase its activity. In the last meeting, we declared Turkey's determination. The Islamic State of Iraq and al-Sham's (ISIS) threatening the Jarablus Harcalah-Mare line through the north and south axis and the Jarablus-Harcalah line through the east and west axis and the PYD's fait accompli on the Jarablus-Harcalah line threatens Turkey's national security.

Among the developments that might emerge there, there is the threat of ISIS occupying the corridor between Turkey and Aleppo. Then, all the bases for Aleppo and the moderate opposition of the Free Syrian Army will collapse. Also, there is the possibility of a huge refugee influx because there are no Kurds living there. We do not want a scene reminiscent of a demographic change, like the ethnic cleansing and migration wave that took place after the PYD seized Tal Abyad. We want the moderate opposition to control a line that will prevent a wave of migration on our borders. When there are moderate opposition controls, there is no migration because they can harmonize with the people who live there. When the regime seizes an area, whoever they are, everyone flees. The same happens also for ISIS. Again, when the PYD seizes power, everyone except Kurds run away. Even Kurds who do not support the PYD run away.

Giving no response to the question of whether U.S. Air forces will be able to use the İncirlik base, Davutoğlu indicated that train-and-equipment activities would also continue. "The train-and-equipment process will continue. This moderate opposition must be trained since it can resist both the regime and ISIS," he added.
Last Update: Jul 13, 2015 8:27 pm
RELATED TOPICS