Uighurs sent back to China with sacks on their heads 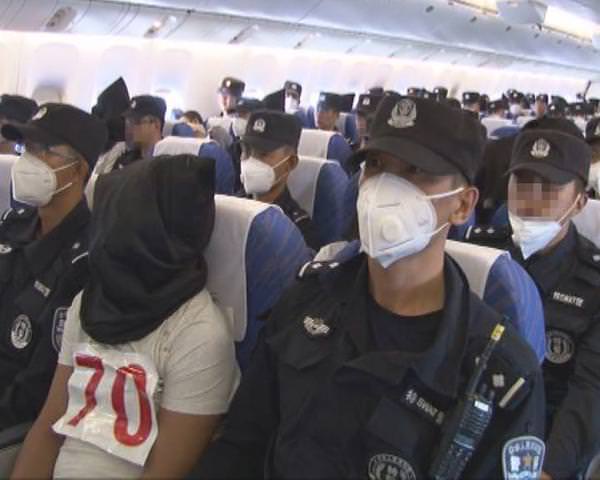 Photo taken from Twitter
by Daily Sabah Jul 12, 2015 12:00 am
The Uighurs that fled Chinese persecution and sought refuge in Thailand have been sent back to China with sacks on their heads. The photographs of the Uighurs, who were held by Thai officials for 16 months, were disclosed to the press by Vice President of the World Uighur Congress and President of the People of East Turkestan Association Seyit Tümtürk.

Tümtürk said a group of Uighurs "put their lives in danger" and sought shelter in Thailand after escaping the oppression imposed by the Chinese government to practice their religion and customs. They were held by Thai officials for 16 months on the grounds of "border violation." He said these 115 Uighurs were later sent back to China via plane during which their heads were covered.

The pictures of the Uighurs were first published on China Central Television (CCTV) and the Thai government announced on July 9 that the 115 Uighurs were deported.

"While they were brought to China, they were forced to wear sacks on their heads. As you can see from the pictures, these Uighurs were placed among two Chinese officers and are wearing sacks on their heads. Thailand unfortunately submitted our cognates to China in exchange for a bribe of $3 billion following 16 months of captivity," Tümtürk said, expressing concerns over the security of the Uighur Turks.

Tümtürk also condemned the publications that ran in the Chinese media, claiming that the Uighurs are "terrorists."

"We definitely reject that they are terrorists. On what grounds are they terrorists? Based on what? It is impossible to understand the release of women and children and depicting all of the men with set up images. There could be no grounds [for such an act], if there is there has to be documents [proving the claims]," Tümtürk further explained.
Last Update: Jul 12, 2015 4:49 pm
RELATED TOPICS