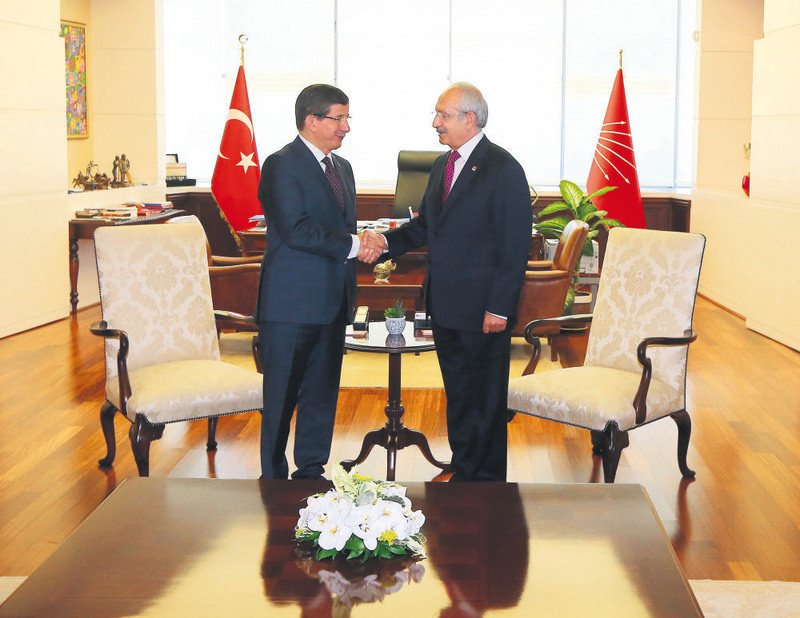 Coalition talks, which started on Monday, let the four parties verbalize their stipulations and ideological principles, possibly leading to early elections rather than creating an environment that fosters cooperation

It might seem premature to talk about early elections at the very beginning of the official coalition talks that were initiated on Monday by the teams of four by the Justice and Development Party (AK Party) and the main opposition Republican People's Party (CHP), and followed today by another meeting between AK Party Chairman and interim Prime Minister Ahmet Davutoğlu and the Nationalist Movement Party (MHP)'s leader Devlet Bahçeli. However, a look at Turkey's political history, especially in the 1970s and 1990s, shows that it is never too early for pundits to discuss the possibility of snap polls, even as soon as the June 7 parliamentary election results were announced. The AK Party received 40.87 percent of the votes and claimed 258 seats in Parliament, 18 short of a majority government. The CHP followed with 24.95 percent and received 132 seats. While the Nationalist Movement Party (MHP) received 16.29 percent and gained 80 seats, the pro-Kurdish Peoples' Democratic Party (HDP) entered Parliament for the first time with 13.12 percent and gained 80 seats as well. Moreover, PM Davutoğlu said that MHP does not want to be a part of a coalition government. It is self-evident on the second day of coalition talks that possible partnership of the four parties, with dissimilarities in their ideologies, in such a parliament will not be that easy.

That is to say, early elections might be much closer than we think.

Turkey gave a chance to 20 different coalition governments between 1961 and 2002, which is a telling reflection of the ups and downs in Turkey's political history. In addition, a brief history of early elections held in the country proves another point: From the very first snap election in 1957 until now, Turkey has witnessed 15 general elections in total, eight of which were held sooner than expected. With such a scarcity of time back then, many potential theories about the success of early elections were disregarded. And this is exactly why possible snap election scenarios ahead should be discussed soon, unlike the former cases.As none of those four parties had enough of a majority to form a single-party government, they must now negotiate a coalition. Delivering his opinion on the possibility of an early election, Etyen Mahçupyan, former senior advisor to Turkey's prime minister, interpreted the pre-coalition atmosphere, saying, "It is of importance how we will go to such an early election. Assuming that the three opposition parties keep their current stances, I believe that the AK Party's voters, who preferred not to cast their votes in June 7 elections, will go and vote this time, which allows the AK Party to gain an extra three points, and that makes it 44 percent overall." While many experts discuss the possibility of a snap election, official coalition negotiations began as of Monday in the wake of the mandate given to Prime Minister Ahmet Davutoğlu last Thursday by President Recep Tayyip Erdoğan, after the parties determined their parliament deputy speakers. Following the president's request, Prime Minister Davutoğlu clarified his party's first round negotiations; on Monday with CHP Chairman Kemal Kılıçdaroğlu, followed by a talk on Tuesday with MHP Chairman Devlet Bahçeli, and another one with HDP Co-Chairman Selahattin Demirtaş the day after.

According to the post-election schedule described by the Supreme Electoral Board (YSK), early elections are necessary unless a government is formed within 45 days. If Davutoğlu fails to form a government in due course, the task of forming the government will be given to the CHP, which won the second-most seats in Parliament. And if the CHP is not able to form a government either, the possibility of early elections will definitely be on the agenda. According to the constitutional procedure, the temporary cabinet will announce early elections within 48 hours when Parliament or the President calls for them. If a decision for early elections is given by Parliament, the exact date of when voters will go to the ballot box will be designated as well. On condition that the president decides for early elections, however, Turkey will go to the ballot box on the first Sunday following the 90th day after the decision, presumably at the end of November.Some analysts have seen an AK Party-MHP coalition as the most likely option, saying that there is coherence at a grassroots level. However, other pundits argue that such a coalition would mean an end to the reconciliation process. As to an AK Party-CHP "grand coalition," it also has pros and cons. Even though the reconciliation process might be continued by such a coalition, there seems no single coherence in the two parties' grassroots or foreign policies. The HDP has ruled out taking part in a coalition with the AK Party, while an anti-AK Party coalition between the opposition parties seems impossible, since the nationalist MHP refuses to collaborate with the HDP. All of these conflicting party policies and principles may signal early elections. But still, some pundits have high hopes that some type of coalition could be formed. An academic and columnist, Kürşad Zorlu, for instance, believes that "an early election seems less probable than the forming of a coalition."

An earlier signal of snap elections may also be detected indirectly from the four-rounded election process of Parliament speaker. The AK Party's İsmet Yılmaz on July 1 received 258 votes in the fourth round, which is equal to the number of AK Party deputies. While the CHP's Deniz Baykal received 182 votes, receiving an additional 50 votes from deputies of different parties, 29 votes were casted blank and 78 votes were declared void. Although opposition parties showed strong objection to the AK Party's rule in the pre-election period, they failed to come together to elect the Parliament speaker, which was commented on as an objection to Kılıçdaroğlu's 60-percent opposition bloc theory. Turkish journalist Ahmet Taşgetiren said that "Early election seems possible," as he discussed the atmosphere of contradictions.Many research companies have conducted surveys to question the would-be outcomes of early elections. A social research institute based in Turkey, IPSOS, carried out the first survey on June 10, conducting phone calls with 1,572 voters in 81 provinces, to see which party people would cast their votes for in the potential early elections. According to the results, the AK Party gets an increase of 4 percent. And while there seems to be a plateau for the CHP's votes, the MHP seems to have a sudden decrease of 2 percent, followed by another fall of 1 percent in HDP votes. Similarly, other parties and candidates are likely to face a decline of 2 percent.

Another poll was recently conducted by MAK consultancy in 30 metropolitan municipalities, 20 provinces and 194 districts with 5,500 people between June 11 and June 14. After a mathematical distribution of undecided voters, 44 percent of those interviewed said they would vote for the AK Party in snap elections. While votes for the CHP and the MHP remained static, the HDP dropped by 11 percent. Additionally, according to 60 percent of the participants, a single-party government would be more functional than a coalition, while 25 percent believed that a coalition government can be more successful than a single-party government.