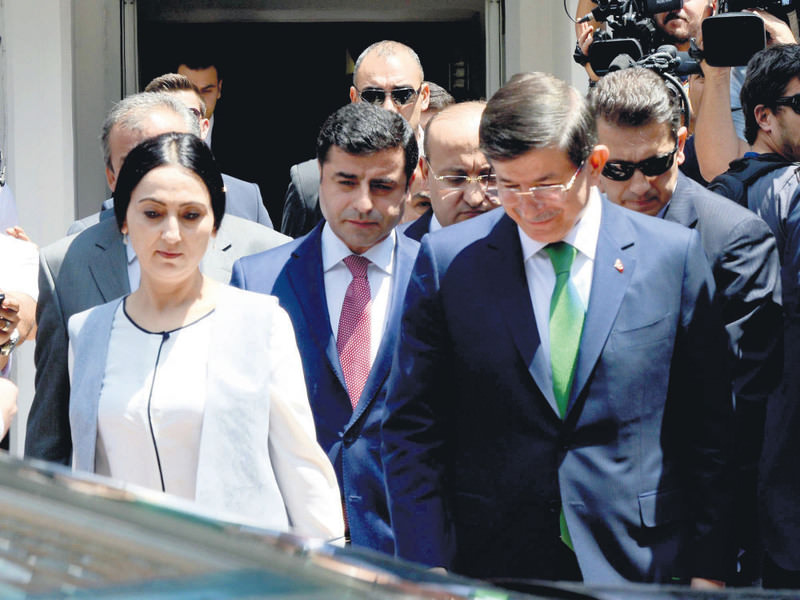 The AK Party's options for a coalition have slimmed down to one, a coalition with the CHP, after it has been made clear that neither the MHP nor HDP will be part of a coalition. The next round of talks will determine the final picture, but Turkey is likely to head back to the polls as the odds of compromise between the two parties have been considered very low

Prime Minister Ahmet Davutoğlu completed the first round of talks with the leaders of the other parties on Wednesday to try to find a partner to form a coalition. He described the inconclusive meetings as preliminary talks during which the party leaders exchanged their views on common points. The negotiations will soon proceed into a second round of talks to see whether the parties can hammer out a deal. Although the first round of talks was inconclusive, there was at least a hint as to which parties are closest to an alliance.

Davutoğlu, speaking after his meeting with Peoples' Democratic Party (HDP) co-chairs Selahattin Demirtaş and Figen Yüksekdağ, said neither party is considering a partnership. Nationalist Movement Party (MHP) Chairman Devlet Bahçeli, maintained his previous stance not to be part of a coalition, reiterating his view on the matter to Davutoğlu during their talks on Tuesday. Together, it leaves only one remaining option viable, which is a coalition with the Republican People's Party (CHP). The CHP has kept its door ajar to a coalition with the Justice and Development Party (AK Party), but this option too could prove to be a hard task, as there is slim chance of a consensus on terms both parties insist on.

The June elections gave no party sufficient power to lead alone, resulting in a hung Parliament, a situation Turkey has not experienced recently. Heated debates have died down after Davutoğlu completed the first round of talks. With options diminishing, the only option is a coalition with the CHP, but negotiations could face an impasse, as the two parties are far apart on the political spectrum.

Aware of the possibility of a failure to compromise, early elections are a last resort at the back of party leaders' minds.

Following his meeting with CHP Chairman Kemal Kılıçdaroğlu, Davutoğlu said: "The meeting was held in a sincere and friendly atmosphere. I would like to express my gratitude to Mr. Kılıçdaroğlu," adding that no bargain or negotiations were made during the first round of talks. He also said both leaders highlighted "mutual trust" and the "formation of a strong government."

Following his meeting with Bahçeli, who has opposed the idea of being part of a government coalition since the election results became clear, Davutoğlu explained that the MHP wants to remain in opposition.

On Wednesday, Davutoğlu met with HDP Co-Chairs Demirtaş and Yüksekdağ after which he told the media that the two parties did not consider teaming up. He cited the HDP's previous remarks that it will never side with the AK Party and said that they have mutually ruled out a coalition. However, Davutoğlu said it would be beneficial and ideal to include the party in the next round of talks to contribute to the formation of the government.

President Recep Tayyip Erdoğan gave Davutoğlu the mandate on July 9 to form a government, starting a countdown that could lead to early elections, considering the friction between the parties. Amid a pessimistic climate, Davutoğlu set his schedule and paid his first visit to CHP Chairman Kılıçdaroğlu on Monday to see whether he can team with the long-standing opposition.Kılıçdaroğlu had previously announced 14 principles and reiterated the party will not concede the terms. Davutoğlu had said they had no red lines that could cripple the process of forming a coalition. During the first round of talks, Davutoğlu reportedly agreed on the majority of the terms previously stipulated by the CHP, indicating that they are close to the AK Party's nine core principles. He said six of the principles overlap with those of the AK Party and three of them do so partly. He did not agree with the remaining three articles, which include President Erdoğan staying within the boundaries of the Constitution and restructuring foreign policy.

If he is unable to form a coalition with the CHP, tradition dictates the president should offer the party that received the second most votes the chance to create an administration within another 45-day period. Should this also fail to provide a governing coalition, the president must call early elections and appoint a prime minister within five days to form an interim government consisting of representatives from all four parties.
Last Update: Jul 16, 2015 1:04 am
RELATED TOPICS