Davutoğlu hopeful coalition will be formed amid abundant doubts 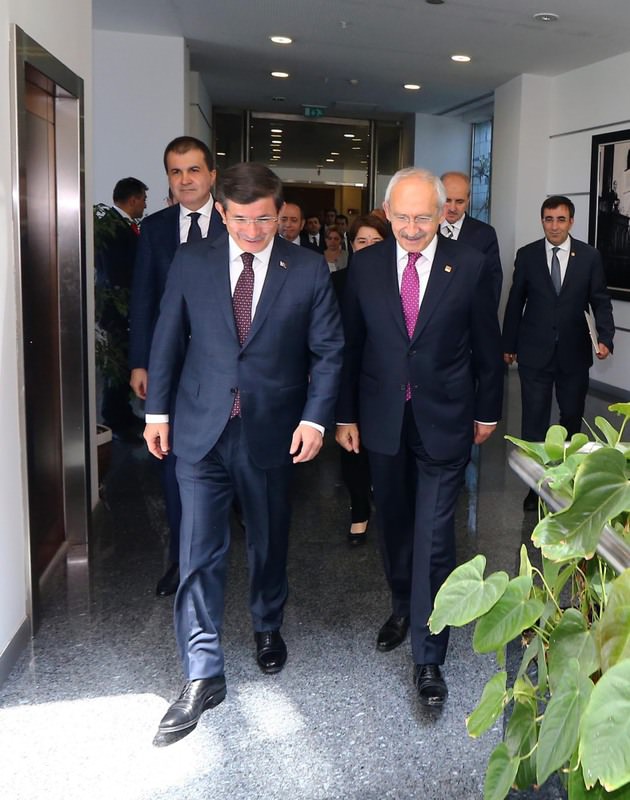 Prime Minister Ahmet Davutoğlu maintains his hope that a coalition will be formed despite the current pessimistic atmosphere due to lack of compromise between the parties, which could end up leading to early elections

After the first round of coalition talks left only one viable option, an alliance between the Republican People's Party (CHP) and Justice and Development Party (AK Party), interim Prime Minister Ahmet Davutoğlu said late on Wednesday that he believed a coalition will be formed, amid reservations that the two parties will be able to strike a compromise over terms that both parties insist on.

Davutoğlu completed the first round of talks with the leaders of the other parties on Wednesday to try to find a partner to form a coalition and is expected to proceed into the second round of the talks after the Eid Al-Fitr holiday. The picture of whether the parties can compromise will be clearer once the next round ends, however Turkey may still head back to the polls as the CHP and AK Party, long-standing rivals that do not have much in common in terms of policies and ideology, might not be able to reach a consensus on their differences. Despite the pessimism in the political sphere, Davutoğlu is hopeful he will be able to form a coalition government.

Davutoğlu, speaking in a question and answer session on a news channel, said: "Once we find a sincere partner, there is no point in not proceeding. What I see at the end of the game is a coalition government," as opposed to early elections, considering that the option at the moment "kills partnership." "Our target is to sincerely form this alliance," Davutoğlu said.

Davutoğlu also touched on the issue of the 10 percent election threshold, which is thought by many as antidemocratic, and said he is in favor of lowering the threshold for political parties in Turkey to be represented in Parliament. He said the AK Party will propose to lower the threshold in the coalition talks, reiterating that the AK Party had already offered to remove it entirely during President Recep Tayyip Erdoğan's time as prime minister.

Turkey's national election threshold has been a topic of debate for some time, with minor parties and parties whose votes hover around the threshold consistently calling to lower the threshold.

Lowering the current 10 percent election threshold was offered by the AK Party in 2013 as part of the reforms that were announced as a democratization package on Sept. 30, 2013.

The AK Party proposed three alternatives in the democratization package – maintaining the 10 percent threshold, reducing it to 5 percent or removing it altogether and fully implementing the single-member district system.

Davutoğlu, in the interview also claimed that in the case of snap elections his party's voting rate will increase. In response to whether the AK Party would prefer possible snap elections rather than forming a coalition government with another party, Davutoğlu said that the party's priority is to form a government and added that the AK Party would easily pave the way for snap elections by letting the tension increase within Turkey if their intention were "not being a part of the coalition." Davutoğlu said not showing the necessary effort in coalition talks would be disrespectful to the nation's will even though the post-election polls indicate that the AK Party would receive 45 percent of the vote in early elections if they were held today and would most likely be able to form a government by itself.

His remarks live on TV, came on the day the first round of talks ended without reaching a conclusion. Davutoğlu described the initial meetings with party leaders as preliminary talks during which the party leaders exchanged their views on common points.

CHP is the warmest toward being part of coalition

Although the first round of talks was inconclusive, there was at least a hint as to which parties are closest to an alliance.

Davutoğlu, speaking after his meeting with Peoples' Democratic Party (HDP) co-chairs Selahattin Demirtaş and Figen Yüksekdağ, said neither party is considering a partnership. Nationalist Movement Party (MHP) Chairman Devlet Bahçeli, maintained his previous stance not to be part of a coalition, reiterating his view on the matter to Davutoğlu during their talks on Tuesday. Together, it leaves only one remaining option viable, which is a coalition with the CHP. The CHP has kept its door ajar to a coalition with the AK Party, but this option too could prove to be a hard task, as there is slim chance of a consensus on terms both parties insist on.

The June elections gave no party sufficient power to lead alone, resulting in a hung Parliament, a situation Turkey has not experienced recently. Heated debates have died down after Davutoğlu completed the first round of talks. With options diminishing, the only option is a coalition with the CHP, but negotiations could face an impasse, as the two parties are far apart on the political spectrum.

Aware of the possibility of a failure to compromise, early elections are a last resort at the back of party leaders' minds.

Following his meeting with CHP Chairman Kemal Kılıçdaroğlu, Davutoğlu said: "The meeting was held in a sincere and friendly atmosphere. I would like to express my gratitude to Mr. Kılıçdaroğlu," adding that no bargain or negotiations were made during the first round of talks. He also said both leaders highlighted "mutual trust" and the "formation of a strong government."

Following his meeting with Bahçeli, who has opposed the idea of being part of a government coalition since the election results became clear, Davutoğlu explained that the MHP wants to remain in opposition.

On Wednesday, Davutoğlu met with HDP Co-Chairs Demirtaş and Yüksekdağ after which he told the media that the two parties did not consider teaming up. He cited the HDP's previous remarks that it will never side with the AK Party and said that they have mutually ruled out a coalition. However, Davutoğlu said it would be beneficial and ideal to include the party in the next round of talks to contribute to the formation of the government.

President Recep Tayyip Erdoğan gave Davutoğlu the mandate on July 9 to form a government, starting a countdown that could lead to early elections, considering the friction between the parties. Amid a pessimistic climate, Davutoğlu set his schedule and paid his first visit to CHP Chairman Kılıçdaroğlu on Monday to see whether he can team with the long-standing opposition. Kılıçdaroğlu had previously announced 14 principles and reiterated the party will not concede the terms. Davutoğlu had said they had no red lines that could cripple the process of forming a coalition. During the first round of talks, Davutoğlu reportedly agreed on the majority of the terms previously stipulated by the CHP, indicating that they are close to the AK Party's nine core principles. He said six of the principles overlap with those of the AK Party and three of them do so partly. He did not agree with the remaining three articles, which include President Erdoğan staying within the boundaries of the Constitution and restructuring foreign policy.

If he is unable to form a coalition with the CHP, tradition dictates the president should offer the party that received the second most votes the chance to create an administration within another 45-day period. Should this also fail to provide a governing coalition, the president must call early elections and appoint a prime minister within five days to form an interim government consisting of representatives from all four parties.
Last Update: Jul 16, 2015 8:31 pm
RELATED TOPICS