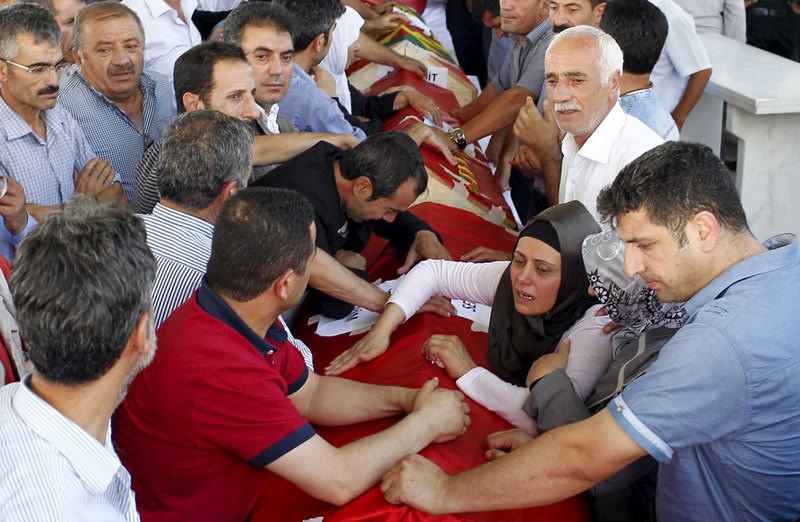 Authorities accused an ISIS member for Monday's terrorist attack while Prime Minister Davutoğlu visited Suruç, calling on all parties to unite against terrorism. However, pro-Kurdish HDP and nationalist MHP remain reluctant to join the call

Prime Minister Ahmet Davutoğlu said yesterday that Turkey will show no tolerance to terrorism and the government will bolster the security measures in place on the border with Syria in the wake of one of the bloodiest suicide attacks in Turkey in years. The perpetrator of the attack is allegedly a militant of the self-proclaimed Islamic State of Iraq and al-Sham (ISIS), who killed dozens and injured nearly 100 in the southeastern border district town of Suruç in Şanlıurfa province on Monday, prompting interim Prime Minister Davutoğlu to make a call on all parties to unite against terrorism, in a proposal that was accepted by Republican People's Party (CHP) Chairman Kemal Kılıçdaroğlu alone. Peoples' Democratic Party (HDP) Co-Chair Selahattin Demirtaş, who has sharpened his discourse, ruled out Davutoğlu's proposal for a common stance against terrorism, citing lack of trust in the government. A bomb attack in the border town of Suruç killed at least 32 people, while a crowd of roughly 300 young activists gathered in the garden of the Amara Culture Center in Suruç before they planned to set off for the Syrian town of Kobani to assist in its reconstruction. The youngsters, who were members of the Federation of Socialist Youth Associations (SGDF), were chanting slogans and preparing to make a statement regarding their aspiration to rebuild Kobani, when the blast ripped through the assembled group.

The attack, which was denounced as an act of terrorism, was immediately condemned by Turkish officials and prompted worldwide reactions.

"Rather than blaming one another and making baseless allegations, parties should come together and sign a joint declaration against terrorist organizations" the prime minister said during a press statement in Ankara on Monday. While CHP leader Kılıçdaroğlu leaned toward participating in the declaration, the chairman of the Nationalist Movement Party (MHP) and HDP Co-Chair Demirtaş ruled out signing the mutual declaration to condemn terrorism.

Speaking to Habertürk, Kılıçdaroğlu agreed that there should be unified action:

"Everyone should take joint action against terrorism. ... We all should fulfill our responsibility toward our country and citizens."
MHP leader Bahçeli, in a statement released on Monday, condemned the attack and revealed MHP would not sign the declaration, saying the party "has nothing to prove" to the world as its stance against terrorism and violence "is obvious."

Demirtaş ruled out the proposal on Tuesday during a joint press conference with the party's co-chair, Figen Yüksekdağ, citing what they called the government's failure to abide by the Dolmabahçe agreement, which was created by the HDP and the government as part of the reconciliation efforts exerted to end the long-standing Kurdish question. "We reached a deal in Dolmabahçe. Will you keep treating that deal as a trivial document? If you don't pay attention to that declaration, there is no point in [signing] new ones," Demirtaş said.

In what looks like rhetoric that is revolutionary and anti-imperialist, he also condemned the deadly attack during his speech and said: "The attack's targeting Turkish revolutionaries that were headed to Kobani to show solidarity, especially after the anniversary of the Rojova revolution, was aimed at breaking international support for Kobani. It is a message to the brave people who are bound with the spirit of revolutionary solidarity around Kobani to 'give up unity'."
Kobani, which is in ruins following clashes between ISIS and the Democratic Union Party (PYD)'s armed wing, the YPG, was under siege by the former before the YPG repelled the militants from the town with the assistance of the U.S.-led coalition. ISIS, which vowed to come back, recently carried out attacks in Kobani, but the militants were pushed out of the town once again by YPG forces.

One allegation is that Monday's suicide attack was carried out in retaliation for Kobani's take over from ISIS. Both media and officials have been dwelling upon the possibility of ISIS being behind the fierce attack since it was carried out on Monday. On Tuesday, officials announced the perpetrator had been identified.

"One suspect has been identified. All the (suspect's) links internationally and domestically are being investigated," Prime Minister Davutoğlu said in televised comments. He added that there was a "high probability" the attack was caused by a suicide bomber with connections to ISIS.

According to sources, the attacker is allegedly Şeyh Abdurrahman Alagöz, 20, whose family previously reported to officials that their son had dropped out of university and joined ISIS in May. He was allegedly trained by the extremist group in suicide bombing.

Furthermore, police departments of 34 provinces across the country are on alert after receiving a tip off stating that the militant group is planning to conduct a series of terrorist attacks in Turkey. Monday's attack also came when Turkey intensified its fight against ISIS after detaining around 600 people in the last six months for their suspected links to the organization and sent 150 of those detained behind bars for their links to ISIS.

Nazegül Boyraz, a CHP municipal council member for Istanbul's Maltepe district, is also among the victims of the deadly attack.

The wife and son of a HDP parliamentary candidate from the western province of Bursa in the past June 7 general elections, Metin Kılıç, were also killed in the attack. Family members of the Kılıç family brought the bodies from Gaziantep province, bordering Suruç, to Bursa.