Turkey is against all kinds of terror, says Presidential Spokesman İbrahim Kalın 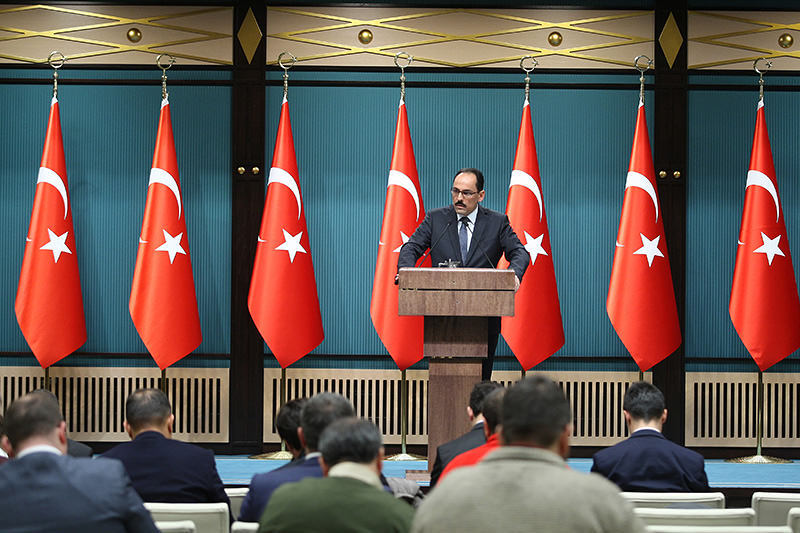 by Daily Sabah with AA Jul 22, 2015 12:00 am
Presidential spokesman made a statement on late Tuesday about the allegations that Turkey supports the self-proclaimed Islamic State of Iraq and al-Sham (ISIS).

"The fact that Turkey is completely against every terrorist organization including Daesh is self explanatory," said the presidential spokesman, using a local acronym for ISIS.

"Along with that, there are also those trying to legitimize the PKK terrorist organization," he added.

Commenting further on the fight against ISIS, he said "It is completely false that Turkey has not condemned Daesh terror and that has not carried out military operation against its militants. Turkey listed Daesh as a terrorist organization in October 2013. Since then, more than 1.600 ISIS-linked militants have been deported and more than 15,000 have been denied entry."

Touching upon the terrorist attack that took place in Suruç in southeastern Turkey on Monday which claimed 32 lives and injured 104, he said, "Extensive investigation has been commenced regarding the terrorist attack in Suruç. With those obvious realities about Turkey's stance on terrorist organizations, it is saddening that some politicians try to take advantage of the suicide attack and breed bad blood in the region."

Demirtaş criticized the government for stoking tensions and on Tuesday attacked President Recep Tayyip Erdoğan for not cutting short an official trip to Northern Cyprus in the wake of the attack.

Demirtaş also castigated Erdoğan for not offering his condolences to the families of the victims, blaming the HDP for the attack and supporting ISIS -- all charges that Kalın said were "unacceptable fictitious claims and deliberate distortions".

He added: "Contrary to Demirtaş' claims, President Erdoğan made a statement yesterday [Monday] where he openly and fiercely condemned the terrorist attack in Suruç and stressed that the perpetrators would be found and punished whoever they may be."
Last Update: Jul 23, 2015 1:04 pm
RELATED TOPICS