US accused of cooperating with Assad regime via Kurds 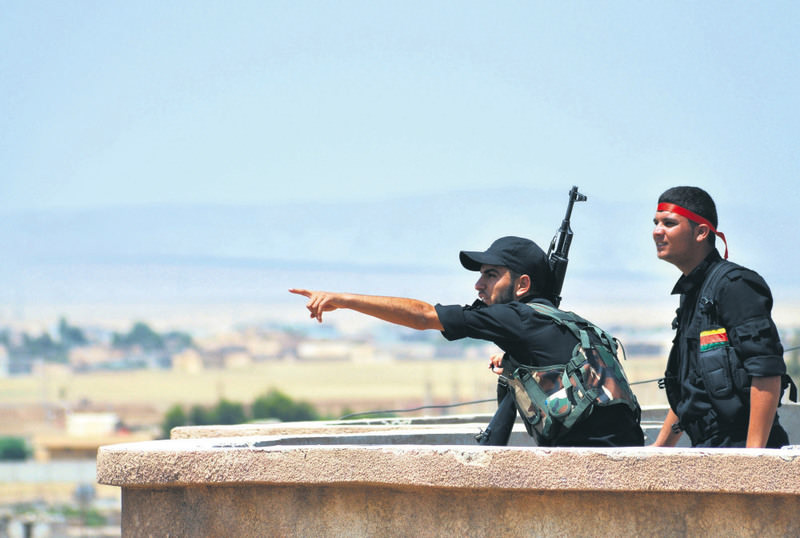 by Ali Ünal Jul 22, 2015 12:00 am
Even though U.S. officials deny allegations that suggest the U.S. is in an alliance with Syrian President Bashar Assad to defeat the Islamic State of Iraq and al-Sham (ISIS), a recent article claims that the Syrian army and U.S. forces coordinate airstrikes, communicating through a Kurdish mediator.

While U.S.-led coalition airstrikes to defeat ISIS terrorists have been continuing for almost a year, allegations about a U.S. alliance with Assad against ISIS have been claimed several times. However, U.S. officials constantly deny the allegations. Last November, U.S. President Barack Obama rejected any alliance with Assad against ISIS, saying that such a pact would backfire. "Assad has ruthlessly murdered hundreds of thousands of his citizens. As a consequence, he has completely lost legitimacy with the majority of the country," Obama said speaking after the G20 summit in Brisbane, Australia. "For us to then make common cause with him against [ISIS] would only turn more Sunnis in Syria in the direction of supporting [ISIS] and would weaken our coalition," he explained.

Notwithstanding, Agence France-Presse (AFP) reported on Tuesday, July 21 that the Syria government and Kurdish forces have joined to fight ISIS in Hasakeh and that the U.S. coordinates airstrikes communicating through a Kurdish mediator. "Washington has insisted that the coalition, which began a campaign of airstrikes in Syria in September 2014, will not coordinate with President Bashar Assad's government. But in reality, a YPG [People's Protection Units] officer told AFP on condition of anonymity: "There is coordination on the flights between the Syrian army and the coalition forces. They communicate through a Kurdish mediator," the AFP reported.

Middle East reporter Çetiner Çetin drew attention to another point that could indicate cooperation between the U.S. and the Syrian regime. He said that a military air field in al-Qamishli, which is 10 kilometers from the Turkish border town of Nusaybin, was still under control of Assad's forces, and was not targeted by ISIS or U.S. airstrikes and was protected by Kurdish forces in the region: "The al-Qamishli base through which Iran provides arms and ammunition to Assad has been actively used for years. The U.S. and ISIS not targeting the said base, despite the active usage of it, indicates indirect cooperation between the U.S. and Assad."

Asserting that this cooperation has been ongoing, Çetin said: "There are various groups in Syria and, from time to time, it is a challenge to distinguish these groups. Assad provides the coordinates and the technical infrastructure to the PYD [Democratic Union Party], thus they can locate these groups and call in airstrikes. The PYD, on the other hand, shares this information with the U.S." Çetin indicated that the release from prison of PYD Co-Chair Salih Muslim, who was incarcerated when the Syrian civil war broke out, could be considered a sign of a strategic partnership between the U.S. and Assad.

Pointing out that Iran Quds Force Commander Major Gen. Qasem Soleimani had held two meetings with U.S. diplomats and military officers in Baghdad in October and December of last year and then moved on to Rojava in Syria, Çetin added, "These intertwined networks of relations reveal who will cooperate with whom and when.

On the other hand, the director of the Center for Middle Eastern Strategic Studies (ORSAM), Associate Professor Şaban Kardaş, said that without a comprehensive strategy, the U.S.'s current plan against ISIS is only draining the wound and will be unsuccessful. Kardaş added that the insufficiency of the Obama administration's strategy in combating ISIS is continuously criticized by many experts in the U.S. He added that it is hard to understand the U.S. government's Syria policy, that it sends mixed messages and that with such confusion present there has also been comments made as to Assad being a part in resolving the crisis in Syria.

Kardaş also said: "In efforts to combat ISIS, the U.S. cooperating with Kurdish actors is not compatible with the realities in the field. The Free Syrian Army and other Syrian opponents must be included in such cooperation. In this regard, rejuvenating the train-and-equip program can be taken into foremost perspective."
Last Update: Jul 22, 2015 11:41 pm
RELATED TOPICS