Turkey to execute all safety measures in the wake of recent attacks by ISIS, PKK: PM's office 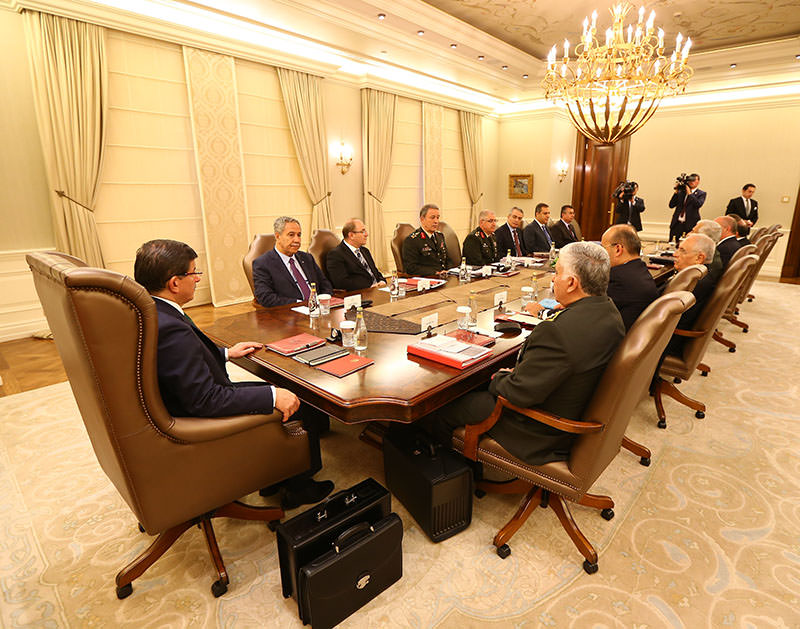 u0130HA Photo
by Daily Sabah Jul 23, 2015 12:00 am
Turkey will continue to execute all necessary safety measures meticulously to ensure public order and national security, while putting all other precautions into execution as soon as possible, the Turkish Prime Ministry said in a press statement published on late Thursday.

The statement was released on Thursday evening at around 10 p.m. after the Prime Minister held a meeting in the Turkish capital Ankara with ministers and senior officials from the army.

The meeting which started at around 17.50 and ended at around 20.30 discussed the recent attacks committed by the self-proclaimed Islamic State of Iraq and al-Sham (ISIS) as well as the outlawed PKK organization, the Prime Ministry statement said.

The meeting accordingly evaluated the safety precautions taken against "heinous attacks" which caused deaths of many citizens as well as security personnel, the statement said further.

Deputy prime ministers, Bülent Arınç and Yalçın Akdoğan, Chief of Staff Necdet Özel, Chief of the National Intelligence Organization Hakan Fidan, Minister of Defense Vecdi Gönül are only of the few names who joined the meeting.

Turkey has been hit by a wave of violence mainly in the southeast, after a suspected ISIS suicide bombing killed 32 people, and injured many others on Monday. The self-proclaimed Islamic State of Iraq and al-Sham (ISIS) also fired shots on Thursday from across the border in Syria, killing an officer and wounding five soldiers in Turkey's southern Kilis province.

The outlawed PKK organization, on the other hand, killed two civilians and a police officer on Thursday, a day after it claimed responsibility for the killings of two other officers who were found dead at their home on Wednesday. The organization has thereby unilaterally broken the truce that was in effect since March 2013 after its imprisoned leader Abdullah Öcalan made a call for peace as part of the reconciliation process that was launched to end the Kurdish question.
Last Update: Jul 23, 2015 11:12 pm
RELATED TOPICS