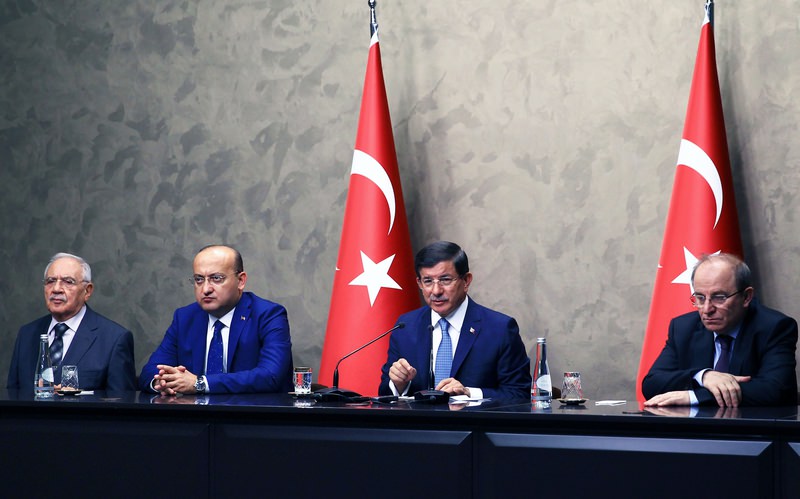 by Daily Sabah with AA Jul 25, 2015 12:00 am
Prime Minister Ahmet Davutoğlu held a press conference on Saturday regarding the airstrikes against the terrorist organizations the self-proclaimed Islamic State in Iraq and al-Sham (ISIS) in northern Syria and PKK camps in northern Iraq, and also The Revolutionary People's Liberation Front (DHKP-C), saying that the President of the Iraqi Kurdistan Region (KRG), Masoud Barzani supports Turkey in fight against terrorists.

During the press conference in Ankara, the prime minister said that he had spoken with Barzani over the phone regarding the second wave of operations against the terrorists has been supported by Barzani: "I had the opportunity to communicate the objectives and framework of the operation, especially in northern Iraq," Davutoglu said, adding that Barzani told him that Turkey's anti-PKK and Daesh operations were based on legitimate grounds.

The prime minister also spoke to the NATO Secretary General Jens Stoltenberg regarding the strikes.

"The operations (against ISIS, PKK and DHKP-C) will continue as long as the threats remain," he added.

Davutoğlu said that he is pleased with CHP's call to convene the Parliament and hopes that "a mutual agreement (declaration) will be reached."

The parliament will convene for an extraordinary meeting on Wednesday with the recent terrorist attacks and terrorism on its agenda.

Prime Minister Davutoğlu said, "Since the June 7 elections, there has been 281 terror attacks, including 121 armed attacks, five kidnappings, 17 extortions, in which five officers have been martyred. We cannot leave the field empty against terrorism."

Turkish police detained 590 terrorists, including 37 foreigners, in simultaneous operations launched in 22 provinces against the ISIS, PKK, and DHKP-C on Friday and Saturday, and the PM stated that these operations will continue, adding that Turkey will "take all the necessary measures as long as PKK continues its attacks."
On Saturday, police operations took place in Istanbul, Adana, Adıyaman, Izmir, Konya, Ankara, Manisa, Kocaeli, Tunceli, Erzincan, and Şanlıurfa provinces.

The nationwide anti-terror operation comes days after 32 people were killed in the southeastern Turkish province of Şanlıurfa on Monday in a self-proclaimed Islamic State of Iraq and Sham (ISIS) suspected suicide attack.