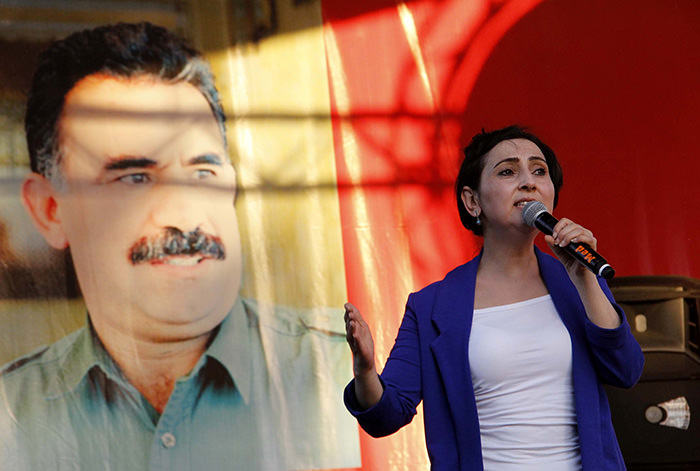 |DHA Photo
by Anadolu Agency
Jul 31, 2015 12:00 am
Prosecutors in Turkey's southern Şanlıurfa province on Friday launched an investigation into the co-leader of the pro-Kurdish Peoples' Democratic Party (HDP) over her remarks about Kurdish groups fighting ISIS in Syria.

On July 19, Figen Yüksekdağ made remarks in Suruç - the scene of a bombing the following day that killed 32 activists in a suspected ISIS attack - referring to the Syrian Kurd Democratic Union Party (PYD) and its two armed wings.

Using a Turkish phrase meaning to rely on the protection of, she said: "We lean our back on YPJ, YPG and PYD and we do not see any harm in mentioning and defending it."

She was speaking after a visit to the Syrian town of Kobani, just across the border from Suruç.

If the investigation results in a criminal prosecution, the Şanlıurfa prosecutors' office said it would seek to revoke her parliamentary immunity.

Demirtaş also faces an inquiry from prosecutors for incitement stemming from remarks he made before a wave of riots across Turkey in October last year. The HDP's opponents have called for him to be stripped of his parliamentary immunity over separate claims.

The HDP entered parliament for the first time after the June 7 general election, securing 13 percent of the vote.

Turkey has been hit by a wave of attacks since the Suruç bombing, with more than a dozen security force members killed and more than 1,300 people suspected of links to the PKK, ISIS and a militant left-wing group DHKP-C arrested.
Last Update: Jul 31, 2015 2:31 pm