President Erdoğan: Reconciliation process on hold due to terror, operations to continue until PKK leaves Turkey 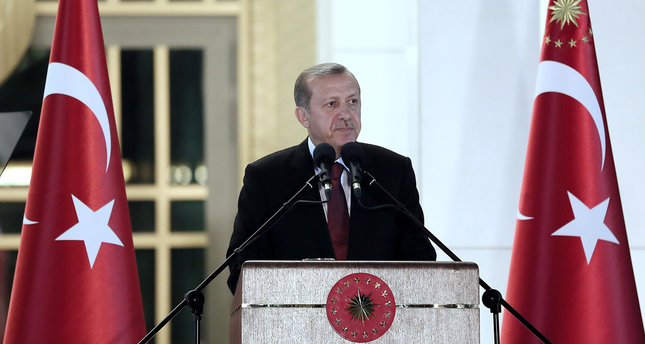 by Daily Sabah Aug 11, 2015 12:00 am
During the Honorary Medal awarding ceremony for Chief of General Staff Gen. Necdet Özel on Tuesday in Ankara, President Recep Tayyip Erdoğan asserted that Turkey will fight against PKK terrorists until they lay down and bury all arms.

Erdoğan commented on the current status of the reconciliation process saying that it has been put on hold due to terrorist attacks and the operations against the PKK will continue until all PKK members leave Turkey.

He said the government had not viewed the "reconciliation process as a process of legalizing or indulging the terrorist organization."

"The reconciliation process is now in the freezer because what is being done is pretty much clear," Erdoğan said, referring to increased PKK attacks on security personnel across the country.

He said that what has happened in the last month shows who is in favor of democracy and freedom in this country, and added: "We have been following how those who were against the steps we took, which we did so for democracy and freedom, are the very same people making an effort to justify the terrorist organization."

He said Turkey is aware of attempts by the terrorists to instill fear in the hearts of its people, but Turkey will not fall for these threats, and added: "We know that terrorist organizations both inside Turkey and outside are suffering losses as a result of Turkey's operations against them."

The cease-fire and the PKK's disarmament process that began in March 2013 with imprisoned PKK leader Abdullah Öcalan's announcement has come to a halt several times and even almost ended owing to attacks on infrastructure, armed forces and civilians following calls on the Kurdish community by the Peoples' Democratic Party (HDP) for street protests. In addition, the contradiction between Öcalan and the PKK leadership in northern Iraq's Qandil Mountains is evident, carrying out bloody attacks while Öcalan called for PKK disarmament.

Over the course of the cease-fire and the PKK's disarmament process, the government remained composed and did not take any military action even though the PKK terrorist organization carried out attacks resulting in dozens of deaths.

Having been determined to bring the three-decade unrest in the country to an end, the government has taken many steps toward improving relations through reforms. The reward for the efforts, however, has so far been contradicting remarks by the political wing of the process as well as the PKK leadership, justifying bloody attacks and threatening the government from time to time. The chronology of statements from Öcalan and top PKK leaders in the Qandil Mountains shows contradictions on the organization disarming with inconsistent statements about the declaration and encouraging an armed fight against the Turkish state.

The period starting from July 11 with the unilateral declaration of the end of cease-fire by the PKK terrorist organization has seen the killing of more than 40 security forces personnel. The state has exercised its right to defense and Prime Minister Ahmet Davutoğlu said it will resolutely fight until the terror across the country comes to an end.

Davutoğlu and Erdoğan have repeatedly indicated that Ankara has always been and continues to be in favor of carrying out the reconciliation process with the Kurdish people. For this, however, all armed factions need to leave the country for good and support along with justification for terrorist attacks need to stop.

Erdoğan also commented on the coalition talks between Justice and Development Party (AK Party) and Republican People's Party (CHP) delegations at a press reception after the ceremony, where he said that it is important for Turkey to have a government in place. In response to whether he will extend the 45-day period to form a government, he said: "I do not have authority to extend the period." He also added that he and Parliament Speaker İsmet Yılmaz have had meetings.

Gen. Özel was awarded a Medal of Honor as his tenure will end on Aug. 30. He will be replaced by Gen. Hulusi Akar.