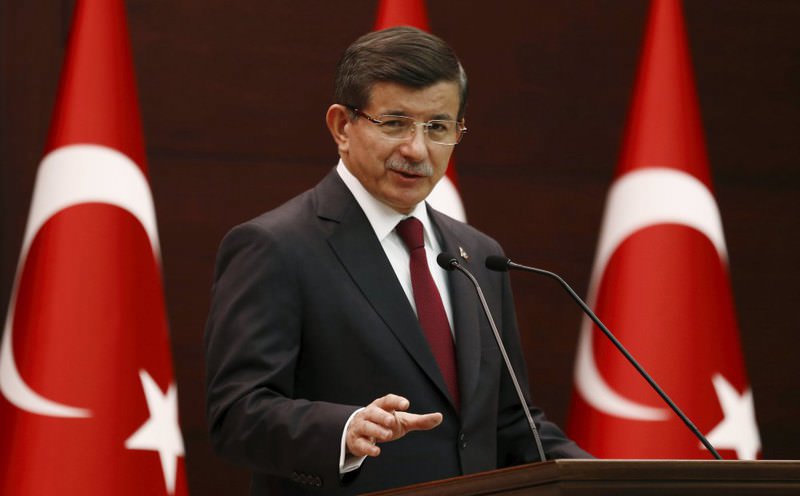 President Erdoğan has authorized PM Davutoğlu to form the caretaker government and he will propose the other parties take part in the Cabinet, stressing that it is a constitutional obligation rather than his personal will

On Monday, at the end of the 45-day period allowed to form a coalition, Erdoğan called for early elections, which the Supreme Election Board (YSK) yesterday announced would be held on Nov. 1. Davutoğlu now has five days to form a caretaker government. The AK Party will have 11 seats, while the CHP six, MHP three and pro-Kurdish Peoples' Democratic Party (HDP) three in accordance with their number of deputies. Davutoğlu is first expected to approach the CHP and MHP, both of which have already declared their intention not to join the cabinet. Only the HDP has agreed to fill the three allocated spaces in the new cabinet.

Afterward, the prime minister is expected to directly reach out to CHP and MHP deputies and former deputies, senior bureaucrats and prominent intellectuals to fill the cabinet posts. The politicians he is expected to offer ministerial posts is said to include former CHP chairman and current Antalya deputy Deniz Baykal. Once the cabinet is formed, Davutoğlu will visit the president for his approval and govern the country until after the Nov. 1 parliamentary elections. The HDP will be given Family and Culture Ministries, according to reports emanating from Ankara.

Prime Minister Ahmet Davutoğlu indicated that unless he proposes ministries for deputies from both the Republican People's Party (CHP) and Nationalist Movement Party (MHP), he would be committing a constitutional crime.

Speaking in a press conference at Çankaya Palace on Tuesday, Davutoğlu said the Constitution draws the lines about this procedure in detail and he will inevitably offer ministerial seats to the CHP and MHP in this period. "If I say CHP and MHP leaders said this and I shall respect what they say, then I shall not send a proposal to any of them and appoint independent ones, I would be committing a constitutional crime. In the event of any application, the legitimacy of this government becomes debatable," he said.

Underlining that he is not in pursuit of making little intrigues and he is bound with a constitutional obligation, Davutoğlu said: "If they respond to my call, I am ready to discuss it with the leaders [of the CHP and MHP]."

After efforts by political parties to form a coalition government failed, President Recep Tayyip Erdoğan officially announced Monday evening that Turkey will hold an early general election on Nov. 1. Following this announcement Erdoğan received Justice and Development Party (AK Party) Chairman Ahmet Davutoğlu on Tuesday and after a one-and-half-hour meeting mandated him to form a caretaker government for the for the first time in the history of the country.

"President Recep Tayyip Erdoğan, who decided for the renewal of parliamentary elections, has received AK Party leader and Konya deputy Ahmet Davutoğlu today and appointed him as the prime minister responsible for the formation of a caretaker government in accordance with the 114th clause of the Constitution," the presidential office said after Erdoğan's meeting with Davutoğlu.

According to the Constitution, a caretaker government will be formed after a three-stage process. The CHP and MHP rejected to participate in the Cabinet, which needs to be established within five days and made official. Therefore, Davutoğlu will officially contact the said parties.

The percentage of votes the political parties received in the June 7 elections dictate the number of ministries they will hold in a caretaker government. The AK Party will have 11 ministries, the CHP six and the MHP and Peoples' Democratic Party (HDP) three each. Davutoğlu will propose ministries to both CHP and MHP deputies as stated by the Constitution, despite their rejection of taking part in the caretaker government. If these proposals are rejected, Davutoğlu will appoint independents to the vacant ministries. The HDP will be represented with three ministers.

According to political sources in Ankara, Davutoğlu is preparing to propose ministries to certain CHP and MHP figures who currently are not members of Parliament, as he wants a broad-based and inclusive caretaker government. Moreover, Davutoğlu is also expected to offer these seats to politicians, academics, writers or bureaucrats who are known to be politically inclined toward the CHP or MHP. There are some rumors that claim former CHP chairman and Antalya deputy, Deniz Baykal, is among the possible figures.