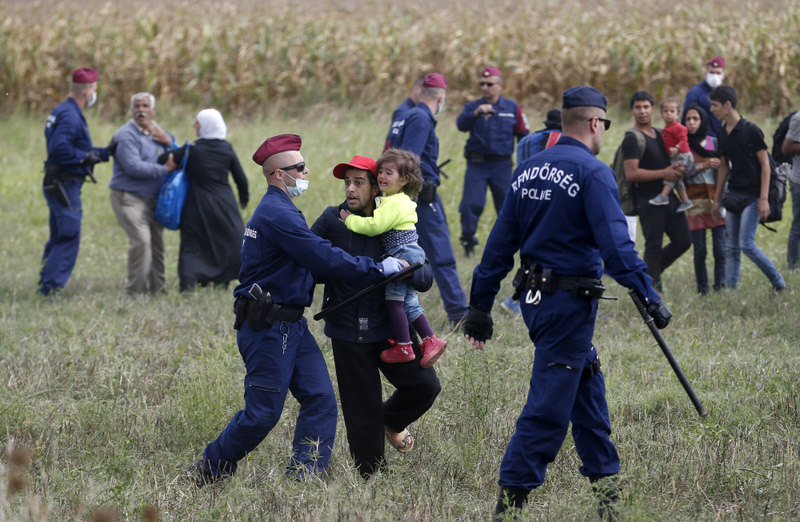 Hungarian police officers stop a group of migrants near a temporary holding center for asylum seekers on Tuesday in Roszke, southern Hungary.
by Yunus Paksoy Sep 09, 2015 12:00 am

In an exclusive article Prime Minister Ahmet Davutoğlu called on EU member states to take immediate and humane actions in order to solve one of the biggest refugee crises in history, criticizing European politicians who discriminate against refugees over religion

Prime Minister Ahmet Davutoğlu's article titled "The loss of innocence," which he wrote for the German daily Frankfurter Allgemeine Zeitung (FAZ) regarding the refugee crisis, was published on Monday. In the article, Davutoğlu called on the EU to take concerted actions immediately toward solving the refugee crisis."It is time to act together," Davutoğlu said, offering co-operation to EU members. The prime minister noted the tough times occurring around the world and said, "The Middle East and Africa are in turmoil. Millions are driven out of their homes and flee the war and persecution from remote regions."

The prime minister also criticized some politicians in Europe who abstain from welcoming Muslim refugees and claim the recent wave of refugees may threaten the Christian structure of Europe, saying "Some European heads of state even rely on Christianity as a war cry in order to keep refugees outside."

Calling on the EU to face the reality, Davutoğlu said, "It is high time for Europe to look in the mirror, be honest about the reflection and stop delaying things." Davutoğlu also condemned any racial or religious discrimination shown toward refugees, saying "Millions of people, African or Asian, Muslim or Christian, Arabic or Kurdish, Pakistani or Afghan, do not migrate out of their own will. To help those in need is a moral responsibility for all civilized societies, irrespective of their race, religion or faith."

Knowing the significance of taking action as dozens of refugees die on a daily basis, Davutoğlu said: "We need sensible, humane and permanent solutions, and we need them straight away."

Davutoğlu rebuked the EU for not doing enough regarding the resettlement of refugees, saying "Meanwhile, EU members take on only a ridiculous part of worldwide resettlement movement." Making his criticism known, Davutoğlu emphasized the role Turkey has played so far in helping the refugees, saying "We have spent more than $6 billion for Syrians, Iraqis and other irregular migrants."

Expecting a more responsive stance from the EU, Davutoğlu said: "EU members must bear responsibility, show humility and be more open." He also offered Turkey's co-operation, saying "Turkey is ready for a concerted co-operation with our European partners in order to tackle this humanitarian disaster."
RELATED TOPICS