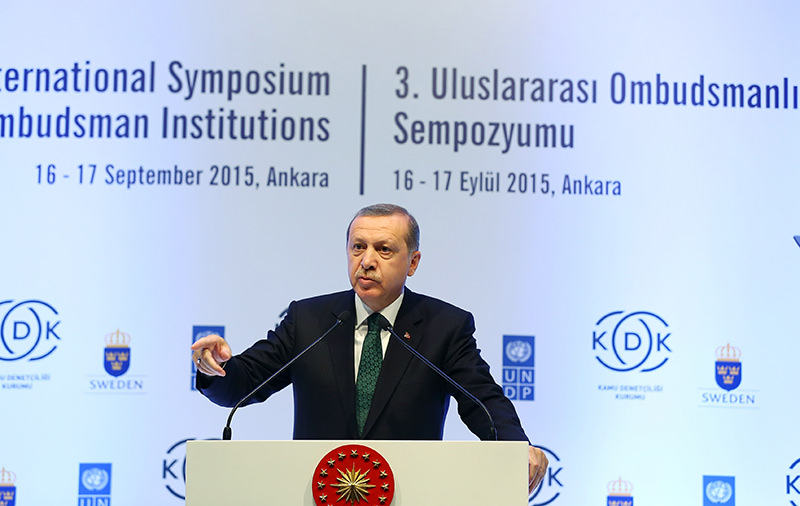 | IHA Photo
by Nurbanu Kızıl Sep 16, 2015 12:00 am
President Recep Tayyip Erdoğan on Wednesday highlighted the importance of finding a solution to the Syrian crisis and warned that it could multiply if necessary steps are not taken to stop the civil war in the country.

Speaking at the 3rd International Ombudsman Symposium, Erdoğan stated that the Syrian crisis poses a serious threat to peace and security in the region.

"As long as the clashes continue, people will turn towards moving to other countries, and the issue has the potential to grow exponentially." the Turkish president said, underscoring that it is crucial for a democratic regime to replace the existing dictatorship.

Erdoğan criticized Western powers once again for hesitating to accept refugees, and said they were in a state of panic as they accept 400,000 asylum seekers fleeing the crisis in Syria and discriminate against them based on their religious background.

"Since 2011, Turkey has hosted over two million refugees, and in addition to this we fight against terrorism" Erdoğan said, while he underscored that Turkey does not differentiate between refugees and discriminate against them based on their religion or ethnicity.

"What is important for Turkey to accept refugees is the fact that they are oppressed and victimized" Erdoğan said, and added that Turkey will continue to keep its doors open to refugees, based on humanitarian and moral grounds.

The Turkish president also noted that Turkey's friends in Europe must be aware that the ultimate destination of the people arriving at their borders is not Europe, but their own countries, which are currently impossible to live in.

"The solution to the refugee crisis is not through closing the doors, building wire-fences and walls on the borders" Erdoğan said, underscoring that the actual solution is to stop the violence and clashes in their homelands, and enable democratic administrations to rule these countries.

"At that point, there will be no reason for these people to arrive at our or European borders" Erdoğan added and said that European countries should understand that the peace of their citizens cannot be possible if there is unrest in the region, as it directly affects everyone.

Harshly criticizing Russian interference in Syria, Erdoğan said that it is unconscientious to look at the situation from a point of view focused on international balance of power and political calculations.
He called upon the international community once again to take immediate action and take steps to resolve the crisis in Syria by bringing down the oppressive regime in the country and replace it with a democratic administration.

"Otherwise, it is evident that people will continue to move out of Syria to seek refuge, if the conflict is not stopped" he underscored.

Millions of people have been forced to flee as a result of turmoil in the Middle East and the five-year war in Syria. According to U.N. figures, Turkey officially has hosted 1.8 million refugees, while Turkish officials claim the figure is over two million.

Over 400,000 people have crossed the Mediterranean Sea to Europe this year, and 2,748 of these have died or are missing according to the International Organization for Migration. The 57-member Organization of Islamic Cooperation meanwhile urged the United Nations on Sunday to consider a peacekeeping force for Syria to help stem the flow of people trying to reach Europe. Despite the serious crisis threatening the continent, especially Eastern European countries still resist not to share the burden.

As victims of the Syrian civil war continue their troubled journeys to European countries, German Chancellor Angela Merkel held a telephone conversation with President Recep Tayyip Erdoğan and discussed the ongoing crisis and the fight against the Islamic State of Iraq and al-Sham (ISIS) in Syria.

In the telephone conversation on Wednesday, Erdoğan reportedly told Merkel that Turkey harbors over 2 million Syrian and Iraqi refugees and its Coast Guard had intercepted over 50,000 migrants in the Aegean Sea since the beginning of the year. He called on EU countries to take responsibility and share the burden caused by the Syrian crisis.

Merkel thanked Erdogan for Turkey's sensitivity and said that Germany had decided to take in about 800,000 refugees until the end of the year.

Erdoğan expressed Turkey's concerns over EU countries' reluctance to extradite members of the PKK, which is listed as a terrorist organization by the EU and the U.S.

EU member states have rejected extradition requests for hundreds of suspected PKK members since 1984. Turkey had requested Interpol issue Red Notices for the extradition of 657 PKK activists, which indicate those individuals are wanted for prosecution or to serve a sentence based on an arrest warrant or court decision. Germany, which initially cited Turkey's use of the death sentence as a reason for rejecting extraditions, has refused to hand over 27 PKK members due to claims they would face "aggravated life imprisonment."