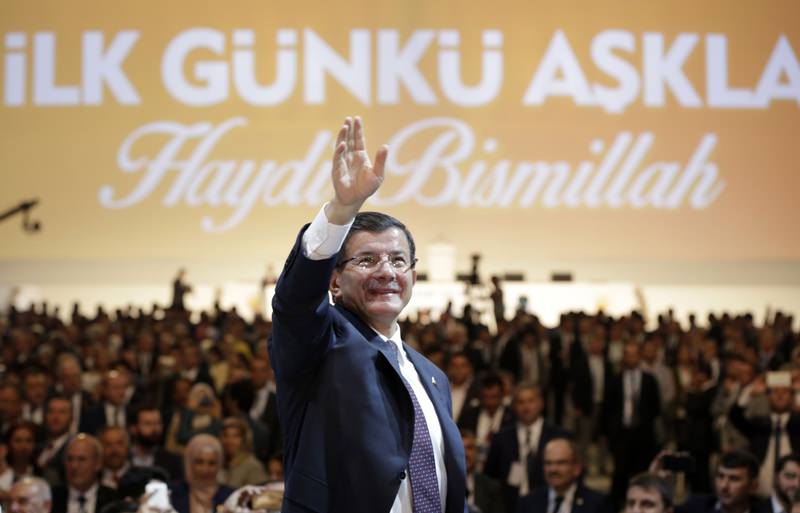 With the aim of regaining a majority in Parliament, the AK Party has made some changes to its candidate list, which was presented at a meeting in Ankara with the slogan: ‘Passion of the early days,' referring to the intra-party excitement it had in its first years

Prime minister and chairman of the Justice and Development Party (AK Party), Ahmet Davutoğlu underlined the importance of public order and unity of the nation in a speech in Ankara at the party's introductory meeting of parliamentary candidates for the Nov. 1 general elections. Both experienced politicians and youth are represented among the choice of candidates.

The slogan of the meeting was "With the passion of early days," referring to the intra-party excitement that the party had in its first years. Davutoğlu said that it is crucial to carry out the elections in a peaceful and democratic atmosphere and listed a number of points for all political parties to take into consideration.

The candidate list that was submitted last week to the Supreme Election Board (YSK) includes veteran figures that were not on the list for the June 7 elections after the party's three-term rule was removed.

In the introductory meeting, in which high security measures were taken, there was great support by the public as the crowd continuously chanted from the beginning until the end of the meeting with AK Party supporters and the crowd outside chanted slogans condemning PKK terror. Following the arrival of all the deputy candidates and Davutoğlu to the Ankara Arena, AK Party Deputy Chairman Bekir Bozdağ gave the opening speech, beginning by thanking all the applicants for deputy candidate nomination, and emphasized the coalition periods in Turkey. Bozdağ said, "Coalition eras have only backtracked Turkey."

Continuing on with the meeting, Davutoğlu began with discussing the events that have occurred following June 7 general elections. Emphasizing the AK Party's position in politics, he said: "Those who assumed that Turkey would fall into chaos and crisis because we couldn't come to power on our own despite having gained 258 deputies have seen that the backbone of politics in Turkey is the AK Party." Davutoğlu further stressed that no one can shape or design politics without including the AK Party in a government. Davutoğlu also underscored the need to establish a safe and secure atmosphere for the elections, and added: "Let us stand shoulder to shoulder with a joint declaration before the election campaigns start."

Among all 3,667 applicants for deputy candidate nomination, 550 were selected due to YSK regulations. The AK Party has made the greatest change to its deputy list, with 312 who were nominated for the June 7 election being nominated again for the Nov. 1 elections. Davutoğlu also announced that the AK Party's election manifesto will be introduced on Oct. 4. He sent a number of messages to the other political parties, touching on the issue of the presidency, and urged political parties to refrain from exploiting the office of the presidency as a political debate. He also called on all political party leaders to respect the privacy of their political rivals and their families.

One of the most gripping remarks from Davutoğlu in his speech was his call on political parties to be environmentally aware and avoid or minimize the use of party flags, as well as announcements made on the streets in order to prevent environmental and noise pollution. He finalized his speech by urging not to question the nation's will, as he asserted that the AK Party will form a single-party government after the Nov. 1 elections.

As the deputy candidates were being announced, former Labor Minister Faruk Çelik, who was nominated from the southeastern province of Şanlıurfa, received most of the applause. In addition to Çelik, Binali Yıldırım, who was the former transportation minister and adviser to President Recep Tayyip Erdoğan, is another veteran deputy candidate who received great attention from the crowd. A large group from the crowd wore t-shirts with Yıldırım's picture. Another notable figure from the AK Party deputy candidate was Ali Babacan, who also received a lot of attention not only from the crowd, but also from Davutoğlu.
Last Update: Sep 22, 2015 5:06 pm
RELATED TOPICS