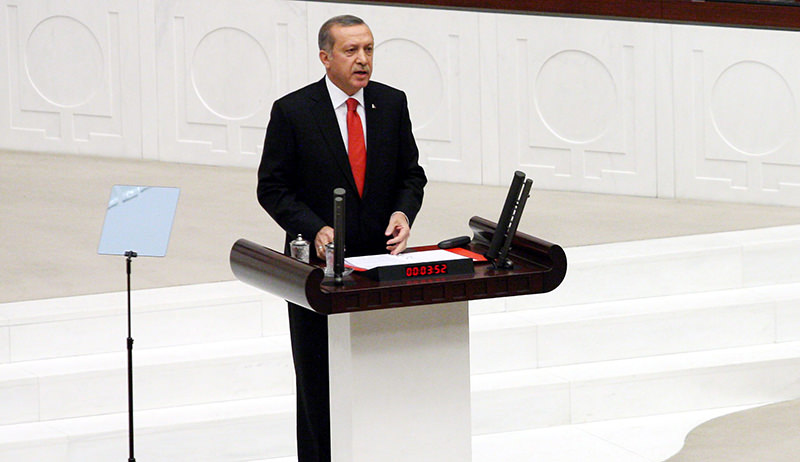 by Daily Sabah with Reuters
Oct 01, 2015 12:00 am
President Recep Tayyip Erdoğan on Thursday said that political parties must act in unison against terrorism that poses a threat to democracy.

Speaking at the opening session of Parliament, President Erdoğan underscored that political parties have a responsibility in terms of ensuring that the will of the nation is reflected in the most democratic manner possible.

"It is a matter of honor and integrity for all political parties to ensure the will of the people is reflected in the ballot boxes in the Nov. 1 elections," Erdoğan said. "I hope that political parties will put forward a conscious attitude to block the threats of terror over the polls."

The president made remarks on the PKK terror activities saying, "These operations [against the PKK] will continue until the threat of terror is eliminated and the weapons are buried."

President Erdoğan also said that the current operations are not against Kurdish citizens but against the PKK terrorist group.

"Our struggle is not against an ethnic group, it is against terror, terrorist groups, and terrorists. The biggest harm done by terror is endured by our Kurdish brothers," he said.

The president also commented on Turkey's efforts to support the Syrian refugees saying, "In addition to doing its job as a neighbor, Turkey has also been saving the honor of humanity. Our nation has taught the international community a lesson in humanity."

"Turkey has spent more than $7.7 billion on Syrian refugees in Turkey, while the support from other countries has been only $417 million," he added, criticizing the lack of support from western countries for Syrian refugees.
Turkey will not allow "terror to take root" or "fait accompli situations" next to its borders, he said a day after Russia launched airstrikes in neighboring Syria.

Russia launched its biggest intervention in the Middle East in decades on Wednesday, targeting areas near the cities of Homs and Hama in the west of the country, where regime forces are fighting a number of opposition groups, though not the Islamic State of Iraq and al-Sham (ISIS), which is based mostly in the north and east.

The move by Moscow puts Ankara - which has long called for Assad's removal - in an uncomfortable position.