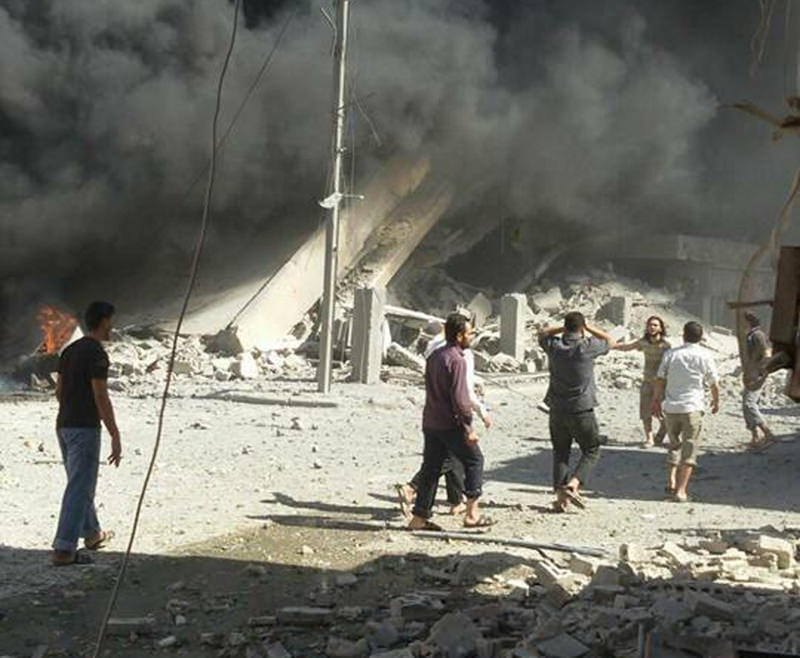 After deploying dozens of aircraft to Syria in an attempt to assist the Assad regime, Russia started striking Western-backed opposition targets. Many NATO members slammed Moscow's actions, saying it will further fuel the worrisome civil war in Syria

Days after deploying 50 aircraft to Syria in an attempt to assist Syrian leader Bashar Assad's regime, Russian Foreign Minister Sergey Lavrov said Russian fighter jets hit several ISIS targets in Syria. However, the targets hit were mainly Western-backed opposition positions and many civilian casualties were reported in different regions of the war-torn country. Russian warplanes conducted airstrikes on groups "funded and trained by our CIA," U.S. Senator John McCain said Thursday, a claim that could mark an escalation in tensions between Moscow and Washington. "Their initial strikes were against the individuals and the groups that have been funded and trained by our CIA," McCain told CNN, adding that the move showed Moscow's real priority "to prop up" Assad.

Local sources claimed that the priority of the Russian strikes was to damage the Free Syrian Army (FSA) and other opposition group positions. Areas where ethnic Turkmens live in Homs and Hama came under attack on Wednesday, the Turkey-based Syrian Turkmen Assembly said in a statement. In the village of Telbiseh near Homs, 40 civilians, including Turkmens, were killed, it said.

Turkmens, whose Syrian Turkmen Brigades armed wing is allied with the FSA, say they have been targeted by both Assad's forces and ISIS since the civil war began in 2011.Two Russian airstrikes in Syria on Thursday reportedly hit a training camp operated by the rebel group that received military training from the CIA in Qatar and Saudi Arabia, its commander said. Hassan Haj Ali, head of the Liwa Suqour al-Jabal rebel group, said the camp in Idlib province was struck by around 20 missiles in two separate sorties. "Russia is challenging everyone and saying there is no alternative to [Assad]," Haj Ali said. He said the Russian jets had been identified by members of his group who once served as Syrian air force pilots.

His group counts itself as part of the FSA, which was set up by Syrian army defectors after the eruption following the initial uprising. The FSA today is a loose alliance of rebel groups without a centralized command or control structure.

Khaled Khoja, head of the Turkey-based Syrian National Coalition, which opposes Assad, has called on the international community to condemn what he described as the "Russian-Iranian occupation" of the war-torn country. At a press conference held late Wednesday in New York, Khoja described the adoption of measures to protect civilians as a "necessary step" toward the establishment of a "transitional stage" in which Assad would not play a part in the governance of Syria.

Germany expressed concern Wednesday over Russian airstrikes in Syria, urging Moscow to clarify the targets and methods of its military operations. "The recent news about Russian airstrikes doesn't reduce my concerns regarding the situation in Syria," German Foreign Minister Frank-Walter Steinmeier said at a press conference in New York. Steinmeier warned that any mistake during Russian airstrikes may lead to a serious danger.

Saudi Arabia, a leading foe of Assad, demanded his ally Russia end its strikes in Syria, saying they had caused civilian casualties while failing to target the hardline ISIS militants Moscow says it opposes.