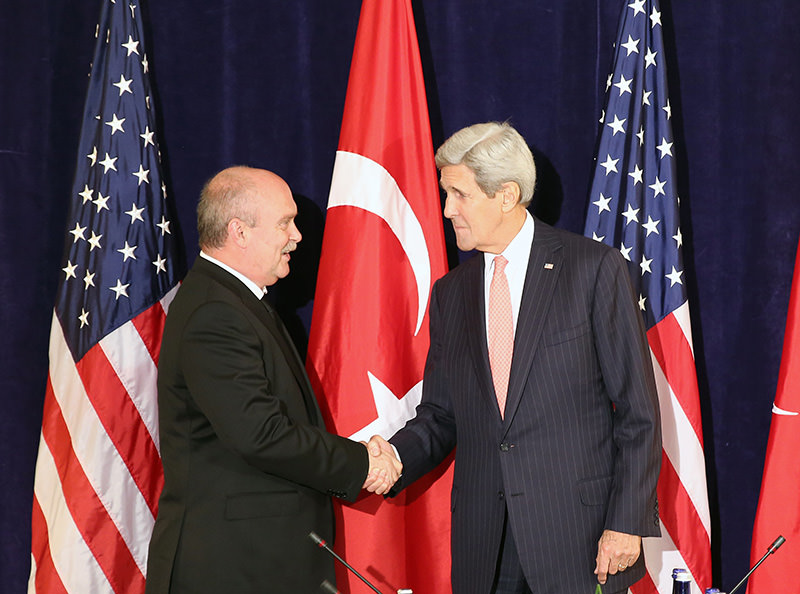 |AA Photo
by Daily Sabah with AA
Oct 02, 2015 12:00 am
Turkish Foreign Minister Feridun Sinirlioğlu held face-to-face talks with his U.S. counterpart John Kerry on Thursday amid escalating tensions between Russia and the West over Syria.

The pair also renewed a commitment to combat the Islamic State of Iraq and al-Sham (ISIS) and other terrorist groups, sources said.

Thursday's meeting came a day after the Russian military carried out its first air strikes in western Syria. The operation resulted in civilian deaths, according to reports.

"What is important is Russia has to not be engaged in any activities against anybody but ISI[S]" Kerry told reporters prior to his meeting with his Turkish counterpart. "That's clear. We have made that very clear," he added.

On the same day, Turkey also expressed concern about civilian casualties that occurred during Wednesday's air raids conducted in the vicinity of Homs, an area where no ISIS militants exist, and is controlled by the Free Syrian Army (FSA).

"We are very much concerned at the reports that yesterday's air operation by Russia was not targeting ISIS but some opposition positions and civilian casualties have also occurred during these operations," Sinirlioğlu told a news conference at the United Nations following a meeting of the Group of Friends of Mediation, a group that promotes mediation to settle disputes among nations.

"If these reports are correct, of course it is very worrisome as it might lead to further escalation," he said. "This is the last thing that we need in this very tragic and chaotic situation in Syria. This will add up to problems in Syria, and will not be helpful for finding solutions to this now long overdue suffering of the Syrian people."
Last Update: Oct 02, 2015 8:28 pm