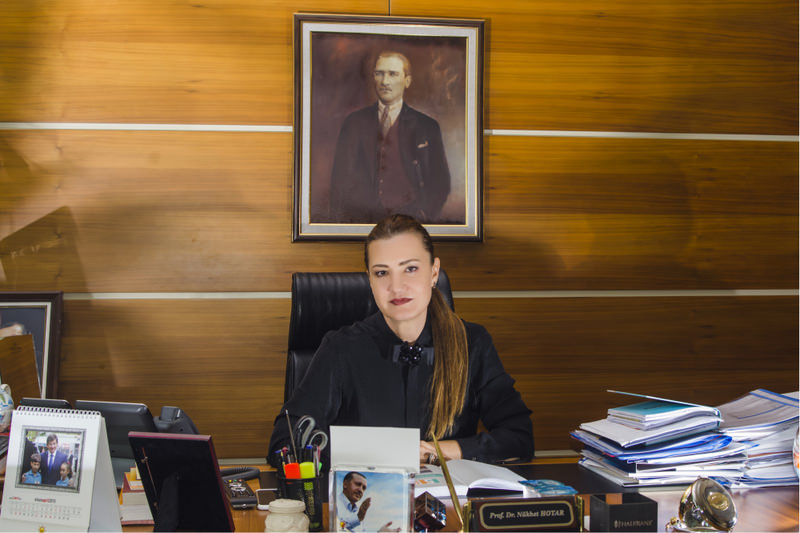 by Merve Aydoğan Oct 10, 2015 12:00 am
Justice and Development Party (AK Party) Deputy Chairwoman Nükhet Hotar revealed the party's upcoming reforms for enhancing life in Turkey will continue and that the recently introduced election manifesto includes comprehensive reforms for all groups in Turkey.Speaking in an exclusive interview with Daily Sabah, Hotar provided information on upcoming projects to enhance women's status in Turkey. Citing that the female labor force participation rate has increased from 26.6 percent in 2000 to 32.3 percent in 2015, Hotar said that although the party has a number of policies that benefit the female employment rate, it has still not reached a preferred rate. Hotar explained that one of the reasons for not reaching the desired rate is due to existing social gender inequality as well as structural issues in Turkey.

Hotar explained that the AK Party's 13 years of work has seen engagement with the elderly, disabled, women and youth as well as to all sects in the country. Hotar said: "Of course we are not saying we have finalized everything, in fact there are numerous actions to be done for social policies in Turkey. So we as a party have existing projects as well as projects that we are also currently working on that we intend to put into practice in the upcoming process." Hotar said the AK Party's election manifesto includes goals for all citizens including farmers, retirees, subcontractors, women and youths. She explained that the party aims to increase the minimum wage to TL 1,300 ($447) a month while providing bigger pensions.In efforts to provide security and shelter to families and children, Hotar said the AK Party will introduce a new program called the Family Social Support Program. Additionally, the electoral manifesto of the AK Party includes enhanced pledges for youth as Hotar explained that career centers will be established in an effort to determine their the path for those entering secondary school education.

According to Hotar, the AK Party has taken various actions to improve social lives of citizens, there has been criticism that the party's social improvements have led to social idleness in Turkey. Responding to such criticism, Hotar said that the government providing social aid to its citizens is part of statehood. She added that providing necessary social aid is important for human dignity. Hotar said that the Family and Social Policies Ministry's Social Aid and Solidarity Promotion Fund continues its activities."When providing social aid for our citizens, their income and needs are taken into account. It is our duty as a government to protect those citizens in need of social aid, and to save them from neediness mindset and to prevent them from being dragged into misdeeds," Hotar said.

She also underlined in the interview that the main goal in the field of social policies is to not only provide short-term action plans but also long-term action plans that will enhance employment, education and health opportunities.As domestic violence and the low levels of female participation in the labor force rate has been one of the most criticized items in the international arena concerning Turkey, Hotar drew attention to the AK Party's actions trying to improve women's status over the 13 years of its single-party rule and said that extra funds have been designated just for female entrepreneurs that allowed more than 5,000 women over the last 12 years to become their own bosses. Hotar emphasized the party's manifesto pledges helping women and said that social security will be provided more easily to female farmers and women who work at home. In an effort to encourage women to enter the workforce, the AK Party will also establish organizations that will provide advice on the topics such as the tendency of the market, legislation, and exports.Underlining that violence against women is a serious issue in all developed countries as well as developing countries, Hotar added that such a problem can only be solved through long-term plans.

"In regard to violence against women, in August 2014 the Istanbul Agreement that aims to protect and prevent violence against women has come into effect. Turkey has been one of the first countries to sign such an agreement at the international level," Hotar said, and explained that the database will be established in an effort to obtain periodical stats regarding violence rates against women and children.With the increasing terror attacks by the PKK terrorist organization, there have been a great number of casualties in the security sources in eastern and southeastern provinces. In this regard, many families face losing their sons, husbands, brothers and fathers. Hotar said providing moral and material support is highly significant, and added that the AK Party is currently working on a comprehensive project that will provide support that will be implemented throughout Turkey. She finalized her comments by adding that the project will come into effect soon.
RELATED TOPICS