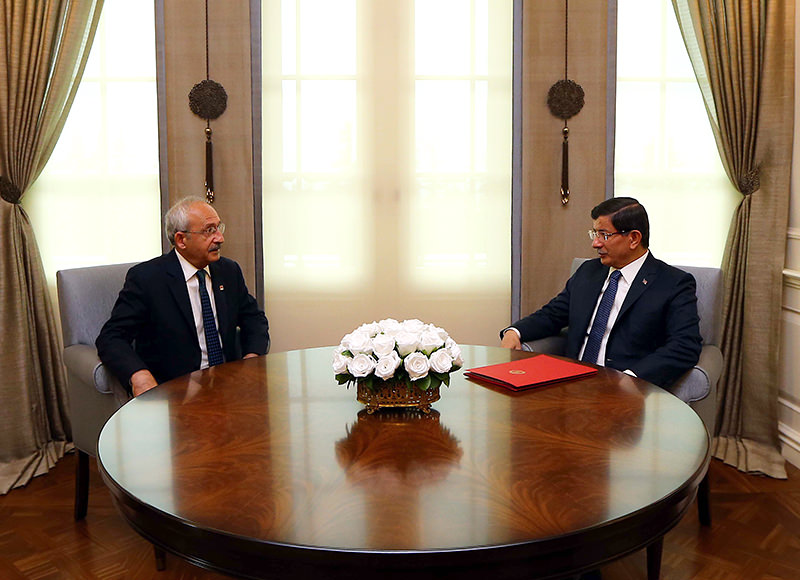 Prime Minister Ahmet Davutoğlu called on the leaders of all political parties to adopt a common stance against terrorism following the deadly bomb attack in Ankara Saturday. Twin explosions targeted a peace rally in Turkey's capital in the morning, leaving at least 97 dead and 246 wounded

The day after the attack, PM Ahmet Davutoğlu met with Republican People's Party (CHP) leader Kemal Kılıçdaroğlu on Sunday afternoon to discuss the latest developments and the deadly terrorist attack.

However, Nationalist Movement Party (MHP) Chairman Devlet Bahçeli rejected the prime minister's call and said Davutoğlu is accustomed to his negative answers and he again responded negatively to Davutoğlu's call, implying the MHP leader's staunch opposition to any solution on forming a government after the June 7 elections.

During a press conference on the day of the attack, Davutoğlu said: "Let's not assess terror according to the perpetrator or to the victims. The victims of all terrorist attacks are victims, and it is our duty to protect the rights of all victims. Whoever perpetrates terror is guilty. They are the enemies of humanity and mass murderers. We should stand shoulder to shoulder against them."

CHP leader Kılıçdaroğlu expressed sadness over the gruesome incident and said, "Whatever our political view is, we all must jointly curse terrorism."

Kılıçdaroğlu said his party was ready for any type of cooperation with government officials to end terrorism. "I said many times, and I am saying it again: All political parties should have a say regarding terrorism. Terror is a crime against humanity," said Kılıçdaroğlu.

In his speech, Davutoğlu criticized pro-Kurdish Peoples' Democratic Party (HDP) Co-Chair Selahattin Demirtaş who earlier blamed the government for the attack. "It is not suitable for a chairman of a party that is represented in Parliament to hold a state responsible by drawing conclusions regarding the attackers, while there is no certain data on the incident, and at the same time by ignoring the numerous martyred soldiers and guards killed by mines placed by the PKK or civilians killed in a soup restaurant in a PKK bomb attack."

Speaking after the meeting, Kılıçdaroğlu said that he told PM Davutoğlu that the Justice and the Interior ministers should submit their resignation over the attack and added HDP leader Selahattin Demirtaş should not be sidelined.

Kılıçdaroğlu also said that he had been told at the meeting that both suicide bombers were men.

Forty-eight people remain in intensive care, according to a statement from the Prime Ministry Coordination Center late Saturday. Fifty-two of those who were killed have been identified, it added. Earlier, Davutoğlu announced three days of national mourning for the victims.
Security officials based in the capital stated that the attack was carried out by two suicide bombers using TNT explosives, with metal balls added to make projectiles.

Police say they have found body parts belonging to the two apparent bombers and are working on identifying them. The authorities are also checking security camera footage from the area.

Ankara officials also said the method of the attack and the amount of explosives used resembles the deadly Suruç bombing on July 20 this year. Dozens of people were killed in the southern Turkish town when a bomb blast struck a gathering of pro-Kurdish activists.

Train service was delayed at the train station after the blast, Turkish State Railways said. In the station, several windows were shattered by the force of the blasts.
Last Update: Oct 12, 2015 12:47 pm